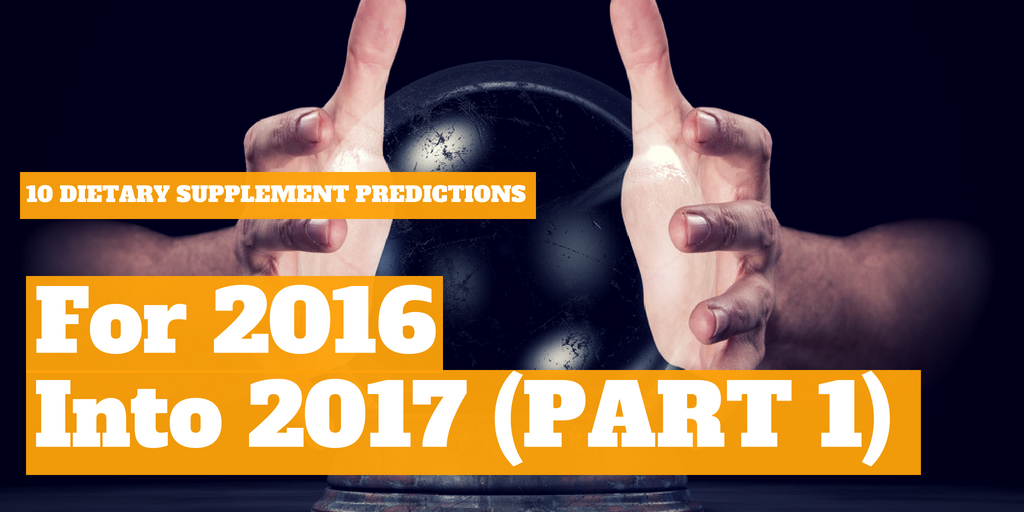 From new ingredients to the trendiest of dietary supplement trends, we’re taking a closer look at the top dietary contract manufacturing supplement and nutraceutical stories of 2016 (so far) that we think will march their way straight into 2017!

August – it marks the end of the summer and the official start of “year end” list season! Even though there’s technically six months left in 2016, we’ve taken the look back and gathered up our thoughts on these 2016 supplement industry highlights.

In no particular order, here's our list of top stories to watch:

For better and for worse, there’s no denying that “changes to dietary supplement regulations” has been a major recurring theme for the first six months of 2016. Some of the highlights include:

Many of this year’s regulatory changes (along with the incidents that prompted them) can be linked – in some way, shape, or form – to the growing consumer demand for dietary and nutritional supplement products that are manufactured with simple, “clean” ingredients and practices.

Looking ahead to 2017, don’t be surprised if the demand for and presence of regulatory changes continues. For brand owners and manufacturers, long-term goals should include embracing consumer-minded regulatory changes and building trust through transparency (of ingredients and processes) with dietary supplement consumers.

Despite certain factors (like the previously-mentioned conversation concerning the efficacy of DNA-barcoding analysis), the sales and demand for herbs and other botanicals have actually grown.

According to SPINS data, over the course of the year-long period ending on May 15th, 2016 sales of herbs, botanicals, and other homeopathic supplements grew by nearly 17% – that translates to total earnings of nearly $1.7 billion.

For those looking to capitalize on the increased consumer interest in herbal and botanical supplements, making a continued effort to craft supplements from pure, high-quality ingredients is likely to play a major role in fueling this category’s recent growth (and mending its lightly tarnished reputation).

When it comes to the promotion of full-body health and wellness among women, supplements are quickly becoming a go-to option.

According to one of the Council for Responsible Nutrition’s (CRN) consumer surveys, as many as 71% of women in the United States (which translates to about 113 million female consumers) take supplements on a regular basis.

That same survey also asked female participants to indicate their top concerns/reasons for taking dietary supplements.  Here’s what they said:

Whether you’re looking to put together a supplement product that’s tailored to women’s reproductive health, sports nutrition, or something in between, it doesn’t look like the demand for specialized, female-centric supplements will be going anywhere anytime soon.

Probiotics have been a MAJOR nutraceutical industry focus throughout 2016. From innovative studies to new breakthroughs and products, probiotics have continued to capture the attention of consumers and industry insiders.

Even though there are dozens of potential delivery methods for probiotics (including everything from liquids to fermented foods), recent market data from SPINS suggests that veggie capsules remain one of the most popular delivery methods – with vegetable capsule probiotic supplements bringing in nearly $73 million dollars in annual revenue. That same data set reported that regular (gelatin) capsules, chewable tablets, and liquids aren’t far behind.

Regardless of which delivery method you settle on for your probiotic supplement, it seems clear that in recent years the demand for probiotics across multiple supplements has moved well beyond the scope of digestive health, making its way into everything from sports nutrition to women’s health.

If researchers continue to study the beneficial effects of probiotics (which they most likely will, well beyond 2017), the potential for finding even more applications for probiotics and probiotic supplement increases exponentially! The more applications there are, the more likely it is that the product/ingredient segment will grow.

We love our plant proteins here at NutraScience Labs, and it seems like the rest of the nutraceutical industry and its consumers do too!

Data from Packaged Facts found that consumers between the ages of 25 and 39 were most likely to look for products and supplements manufactured with plant-based ingredients. They were followed by the 25 and under demographic.

What makes these particular statistics so significant?

The fact that younger consumers seem to be some of the most enthusiastic supporters of plant-based proteins and plant-based alternatives is so incredibly significant because, generally speaking, a younger consumer base leads to market growth and longevity.

Want to read predictions 6 through 10?