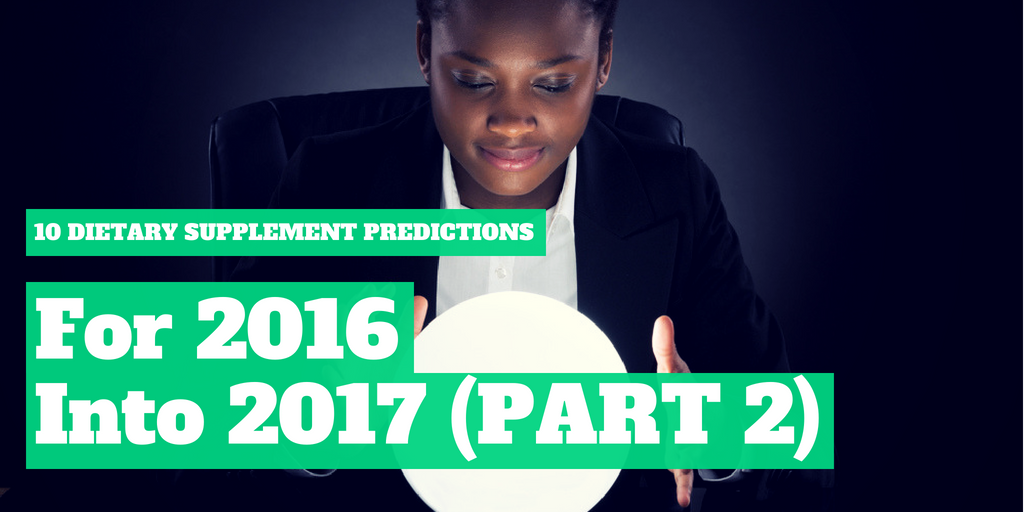 From new ingredients to the trendiest of dietary supplement trends, we’re taking a closer look at the top dietary supplement and nutraceutical stories of 2016 (so far)! We're diving into Part TWO of our "10 Predictions" installment!

Just like Part One of our predictions list, the predictions at the heart of Part Two are built around everything from 2016's most popular ingredients to the stories and trends that simply wouldn't leave the news!

In no particular order, here's the remainder of our "top 10 stories to watch" list:

With dozens of ingredient and application breakthroughs already on the books for 2016, the chances of brain and cognitive health losing any moment within the world of supplements and nutrition seem less than likely.

Over the course of the last six months, we've seen new research and discussions around the role of supplements when it comes to:

Just to name a few! Moreover, in the past year we've seen dozens of ingredients – including healthy fats like omega-3s and spices and herbs like turmeric –  find their way into the discussions concerning aspects of brain health ranging from memory to all-around cognitive function!

From spirulina to chlorella and every variety (with food and nutrition applications) in between, algae has captured the attention of industry insiders and consumers across almost every facet of the health and wellness industry.

Though there's been plenty of chatter concerning the new and exciting applications for algae in the world of functional foods and beverages, when it comes to dietary and nutritional supplements there are two areas where algae have been making particularly noticeable waves (despite their notoriously small size): the world of omega-3 sourcing and the world of plant-based alternative proteins.

Within these two larger conversations (which, might we add, have generated some incredible momentum on their own), certain varieties of algae have earned a place center stage thanks to a number of key factors including (but certainly not limited to): their protein content, their overall nutritional content, and the ways in which they're grown, harvested, and processed.

Whether by their own power or with the help of the larger supplement trends that they've become a part of, we won't be surprised if these single-celled powerhouses effortlessly float their way into 2017.

The Evolution of Sports Nutrition

Like we mentioned back in July, the sports nutrition market is primed and ready for some phenomenal growth between now and 2020. Here a few numbers worth considering:

Along with a notable shift in mindset among society as a whole (towards healthier lifestyles built around good nutrition and physical activity), a growing number of consumers – including seniors and millennials – are choosing to incorporate sports nutrition supplements and products into their regular routines.

Omega-3s. Undisputed veterans of the dietary supplement and nutritional worlds, omega-3s have done (and continue to do) an incredibly good job of adapting to our ever-evolving understanding of how human nutrition (and the human body) actually work.

Like some of the other trends and ingredients on our list, our understanding of omega-3s has seen some drastic changes over the last 20-30 years. The days of omega-3 filled soft-gels being associated with cardiovascular health alone are long gone.

The larger conversation around omega-3s has grown to include dozens of smaller, more heavily focused discussions including:

And the list goes on! Modern researchers are constantly pushing the boundaries of what we know about the possible effects of omega-3s derived from different sources (and delivered in different ways).

So far as practical applications are concerned, turmeric has made the transition from flavorful kitchen spice to a viable dietary supplement ingredient that in high demand! Despite its roots (pun intended) as a millennia-old staple within the Ayurvedic system of health care, modern researchers have made some serious strides when it comes to exploring and substantiating the turmeric's long-standing history of anecdotal claims.

Though there's still plenty of work to be done, existing research has linked turmeric and curcumin to applications ranging from athletic recovery to supporting the health and wellness of those suffering from chronic and acute inflammation issues.

Bottom line, while turmeric and curcumin may not be true newcomers to the health and wellness scene, all signs currently point to (at least) another year under the nutritional spotlight.

We've put some of our best guesses forward and now we're asking you: Which dietary supplement and nutritional stories do you think we'll still be talking about come 2017?