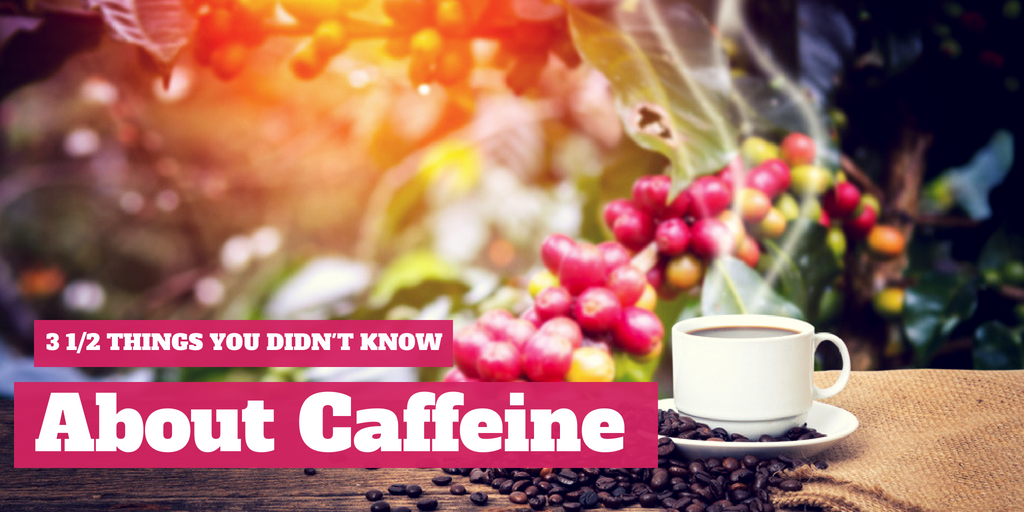 Along with being the morning stimulant of choice for most American adults, caffeine has the ability to influence more than just the first few hours of your day. When taken in moderation, caffeine has been shown to influence the body in a number of interesting ways. That being acknowledged, here are 3 ½ (yes, you read that correctly) of our favorite lesser-known caffeine health facts.

3 1/2 Things You Didn't Know about Caffeine

1 – You Can Get Your Caffeine Absorption in 1 Hour or Less (Mostly).

Does caffeine actually give you energy? On average it takes 40 minutes for 99% of the caffeine in your morning cup of coffee (or pre-workout if you happened to be an exceptionally motivated individual) to kick in.

When it comes to receiving your dose of caffeine quickly and effectively, it seems that liquids may be the best delivery method. When it comes to caffeine’s pre-workout benefits, research has shown that beverages like coffee and energy drinks can deliver caffeine in half the time of more substantial delivery options like gums and capsules. That being acknowledged, if you’re looking for a sustainedcaffeine release to get the most out of your caffeine pre-workout benefits, encapsulated caffeine may be worth considering. Studies have shown that it can take anywhere from 84-120 minutes for the blood saturation level to reach 90%.2

2 - Caffeine May Help You Finish that Extra Set at the Gym.

As it turns out, caffeine is good for more than just an energy boost. Here’s a great caffeine health fact: Thanks to its ability to mimic adenosine, a key player in our sleep-wake cycles, caffeine has the ability to temporarily alleviate feelings of drowsiness by blocking the adenosine receptors in the brain.

How long does caffeine give you energy? Along with its drowsiness blocking abilities, several studies have linked benefits of caffeine before workout with enhanced performance. According to one 2018 study on caffeine's pre-workout benefits on an upper-body resistance exercise workout, participants completed significantly more repetitions per set for the barbell bench press and incline barbell bench press. This suggest that caffeine has an ergogenic effect on strength workout performance.

When there’s no receptor for them to attach to, the adenosine molecules remain in the blood stream, which then causes our adrenal glands to release extra adrenaline – providing an additional boost of short-term energy.

A word of caution: Excessive caffeine consumption can lead to excessive adrenal function, which in turn, can lead to medical complications. Like everything, caffeine is best consumed in moderation.

3 - Suffering from Delayed-Onset Muscle Soreness After Your Work Out? Caffeine May Be Able To Help.

A study published in the Journal of Strength and Conditioning found that even though the participants in the caffeinated group had completed more repetitions during their lifting sessions they reported less post-workout soreness than their un-caffeinated counterparts. Researchers have suggested that the reason for the decrease in post-workout soreness may be linked to caffeine’s aforementioned ability to block adenosine, once again proving caffeine’s pre-workout benefits.

Currently, there are hundredsof studies on caffeine health facts on the human body. And according to that massive body of research, when it’s taken in moderation and cycled properly, caffeine may offer some surprising benefits.

1 - Caffeine for the Sustainment of Mental Task Performance: Formulations for Military Operations ( 2001 )