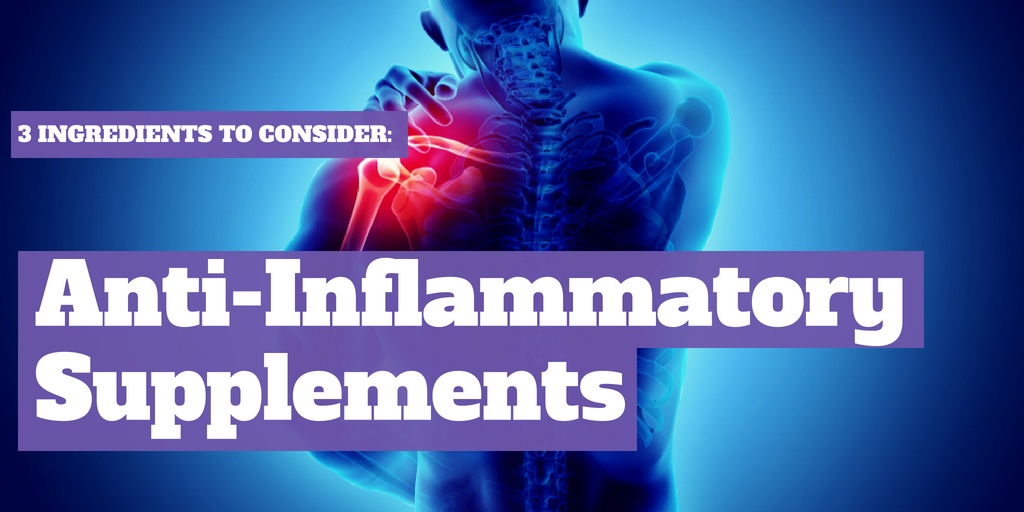 3 Science-Backed Ingredients to Use in Anti-Inflammatory Supplements

For millions of American consumers, daily life is affected (in one way or another) by the presence of inflammation.

While there certainly isn't a "cure" for inflammation (thanks largely in part the hundreds of different factors that can trigger its presence), scientific and anecdotal evidence has suggested that for certain individuals, finding relief can be as simple as making a few key lifestyle changes – actions like increasing/decreasing regular physical activity or tweaking one's daily nutritional intake.

For cases like these, dietary supplements have the potential to be part of the solution.

When looking to meet the needs of a consumer with inflammation issues, there are dozens if not hundreds of ingredients (and ingredient combinations) for supplement brand owners to consider.

Ultimately, it's up to you to know what your consumer's needs are, and which ingredients are best suited to support those needs.

But, for anyone seeking inspiration, we've gathered up three of 2016's most talked about dietary supplement ingredients that have also been shown to support the reduction of inflammation (in certain applications).

Recently thrust into the nutraceutical spotlight thanks to its potential in the Health & Beauty and the Sports Nutrition spheres, scientific researchers have also recognized collagen for having the potential to support joint health and decrease inflammation for those who suffer from osteoarthritis and other joint issues.

A new study performed by researchers at the University of Rochester examined the effects of low and high-dose Peptan (versus a control) on mice with ligament damage in their right knee. may reduce joint inflammation and support cartilage regeneration in mice with osteoarthritis.

At the end of the trial it became clear that in both Peptan groups, a there was a clear difference in the degree of cartilage regeneration and the healing of the secondary structures that allow for smooth, pain-free motion.

According to researcher Mai Nygaard,

“Peptan simultaneously supports all the connective tissues by stimulating local cells in the body to increase the production of collagen and other key matrix components...This new study adds to the growing body of literature testifying Peptan’s ability to support body mobility and joint health and will further strengthen its role in the supplements market.”

Along with the differences in healing and regeneration that were observed, the data suggested that collagen peptides also helped reduce joint inflammation, which happens to be one of the key triggers for joint discomfort and pain. There was a significant reduction in the thickening of the synovial membrane that

Specifically, researchers recorded a "significant reduction" in the thickening of the membrane surrounding the knee in the Peptan groups.

According to Michael Zuscik, PhD, who authored the study, “The results are extremely promising and can open up new doors to the potential benefits that collagen peptides can bring to joint health.”

One of the most popular supplement categories on the market today, there is a ton of research dedicated to the application and potential benefits of the Omgea-3 family of fatty acids.

Along with being recognized as key players in heart health, recent research has suggested that Omega-3s, specifically fish oil-derived DHA (not EHA), may be better at positively influencing blood lipids and other inflammation-specific biomarkers.

Researchers in Canada conducted a study (double-blind, randomized, crossover, and placebo-controlled) that observed the effects of fish oil-derived EPA and DHA (or corn oil placebos) on 154 health, but abdominally obese, participants who also suffered from low-grade systemic inflammation.

At the end of the trials, the researchers concluded that while DHA and EPA both had an effect on inflammation-linked biomarkers, DHA triggered a greater reduction of some (but not all) of these biomarkers.

One of 2016's break-out stars, Curcumin (via Turmeric) has a very long history of as a member of India's Ayurvedic system of health care. One of several Ayurvedic staples to cross-over into the world of mainstream nutrition and supplementation this year, the body of research surrounding curcumin and curcuminoids has been growing steadily.

In one 2010 study, researchers examined the effects of a proprietary curcumin complex on patients suffering from osteoarthritis. With the help of 100 volunteers, ages 45-65, researchers administered two 500mg doses of the blend over an 8 month period.

By the end of the trial, researchers noted that "significant improvements of both clinical and biomedical endpoints" were observed in the test group when compared to the control. This discovery ultimately qualified this particular curcumin blend (and others like it) for more research.

With over 120 years of combined nutraceutical manufacturing experience, our team possesses the knowledge and resources you need to create your own high-quality line of custom anti-inflammatory supplements!

For more information on how to get started, call 855-492-7388 to speak with one of our live representatives or send us your request to receive a free nutraceutical manufacturing price estimate in 48 business hours.