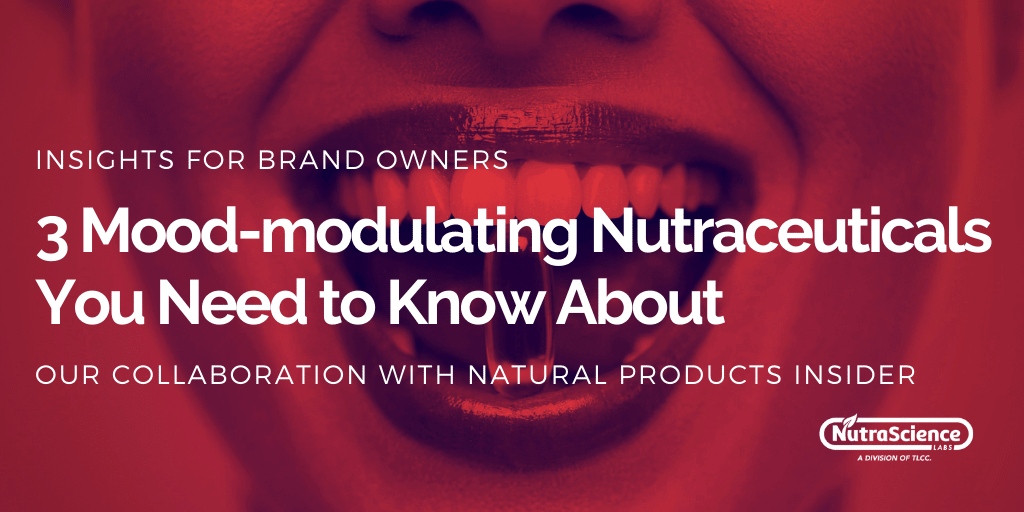 3 Mood-modulating Nutraceuticals You Need to Know About

The following is an excerpt from an article recently published on NaturalProductsInsider.com and written by NutraScience Labs' Senior Director of Product Innovation, Gene Bruno, MS, MHS, RH(AHG). Click here to read the full article.

Although many mood disorders exist, depression is among the most common. Characterized by changes in mood—as well as cognitive and physical symptoms—CDC’s National Center for Health Statistics noted depression is also associated with high societal costs and greater functional impairment than many other chronic diseases, including diabetes and arthritis.

In fact, CDC data indicate a substantial proportion of Americans reported suffering mild (15.6%), moderate (5.1%), or severe (2.9%) symptoms of depression. Combined, 8% of Americans indicated they have moderate to severe depression, and women are more likely to be depressed than men.

Although the best-known herbal medicine for depression is arguably St. John’s wort, it is also most associated with herb/drug interactions. However, a number of other nutraceuticals have shown significant efficacy in the treatment of depression—including mild-to-moderate depression—as well as other mood disorders. Many dietary supplement ingredients are worth considering, but three show particular promise.

Phosphatidylserine or PS is a “brain nutrient” phospholipid that functions as an integral component in the structure of the brain and spinal cord and is active at cell membranes (including synaptic membranes, which transmit information from one neuron to the next).

In a study conducted in 30 elderly outpatients with dementia, supplementation with PS was found to normalize hormones associated with stress in depressed patients.[i]

In another study, the effects of PS on cognitive, affective, and behavioral symptoms were examined in a group of 10 elderly women with depressive disorders.[ii] Patients were treated with a placebo for 15 days, followed by 300 mg/day PS for 30 days. To monitor changes in depression, memory, and general behavior, the Hamilton Rating Scale for Depression, Gottfries-Bråne-Steen Rating Scale, Nurse's Observation Scale for Inpatient Evaluation, and Buschke Selective Reminding Test were administered before and after placebo and after PS therapy.

The results showed depressive symptoms in patients were marked before treatment, did not change after placebo, but were significantly reduced with PS therapy. In fact, PS significantly improved most psychological parameters studied. The remission of symptoms was clear-cut, both based on clinical observation and analysis of scores. In particular, drive, interests, and socialization increased. The patients’ general neuropsychological improvement and better coping with requirements of daily life could be related to the reduction of depressive symptoms.

Additionally, recall and long-term memory were significantly improved. This correlated with attention and concentration, which can be compromised by depression. PS was found to induce consistent improvement of depressive symptoms, memory, and behavior.

Ready to learn about the other two mood-modulating nutraceuticals?

Tips for Growing a Supplement Brand from a 20-year Pro