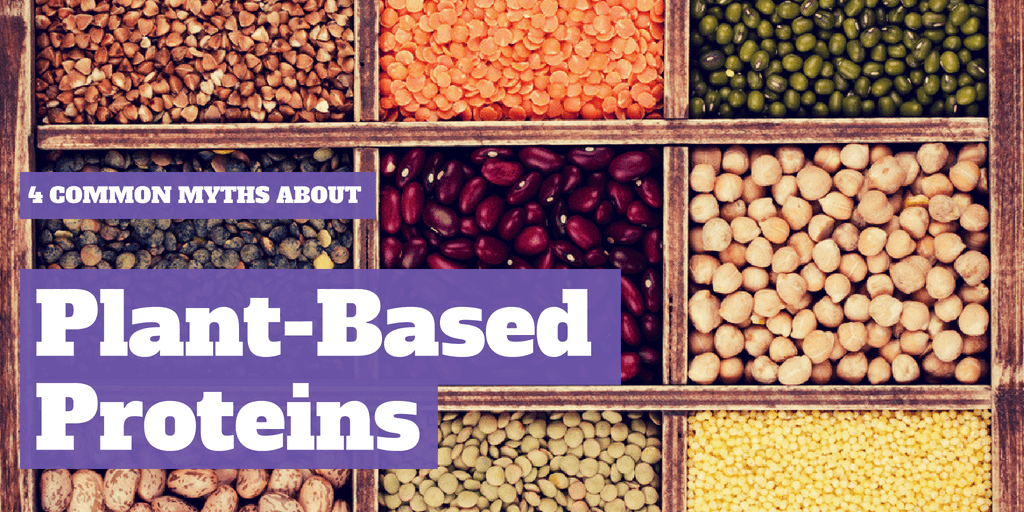 As consumer demand for plant-based and vegan proteins continues to rise, we've set out to tackle 4 of the most popular plant-based protein myths head-on!

Plant-based proteins are here to stay! And rightfully so! While some of the more loyal whey protein enthusiasts have had their doubts (often citing myths like the 4 we're about to debunk), plant-based proteins can offer some incredible benefits!

Myth #1: All plant-based proteins are incomplete proteins – making them less useful than their complete, animal-based counterparts.

What does "incomplete protein" mean?

An "incomplete" protein (regardless of where it may be sourced from), is far from useless so far as our bodies are concerned. "Incomplete" proteins earn the designation because they've been found to be missing one or more of the nine essential amino acids (i.e. those amino acids that the body needs to function but can't synthesize on its own).

When we ingest an incomplete protein – in any form – our bodies don't ignore it because it's incomplete; instead, they treat it like any other protein source and break it down into its component amino acids, which are then stored in the body until they are needed. The body's ability to combine amino acids from multiple sources leads us directly into myth number two!

Myth #2: To make the most of the plant-proteins, you must combine them with other complementary proteins.

Assuming that you or any other individual who's taking a plant-based protein are in the habit of maintaining a healthy and balanced diet (that's meeting all of your nutritional needs) then there's no scientifically backed reason for you to guarantee that you're combining that protein with another, complementary protein.

As numerous studies have pointed out, including a 2019 study published by the National Center for Biotechnology Information, eating a diet that includes a variety of plant foods over the course of the day should be more than enough to provide you with healthy amounts of all nine essential amino acids.

Myth Number 3: Plant-based proteins have too many carbs.

This is another myth where the general perception doesn't always line up with the reality. While there's no denying that many plant-base proteins and protein products may inherently contain a slightly higher number of carbohydrates than their whey proteins counterparts, the difference between the two may not be as large as many fitness enthusiasts have been led to believe.

Interestingly enough, for a number of the plant-based protein supplement products on the market today, the process of turning the raw plant protein into a finished product can eliminate a large portion of those naturally occurring carbs – leaving a finished product that has a "good" to "really good" carbohydrate/protein ratio.

In an effort to really debunk this myth once and for all, consider the following:

And these were the ratios for 3 plant-protein products of dozens. Not too shabby, right?

Our last myth is another that's been fueled, it seems almost exclusively, by anecdotal claims. While there may be some scientific research to back the claim that plant-based proteins aren't as effective as animal-based proteins when it comes to building muscle, there have been numerous studies demonstrating that the reality is anything but black and white.

A considerable amount of research, including this study published by researchers at The University of Connecticut, has demonstrated that when compared to whey protein, certain plant proteins (like rice protein in this particular instance) generated increases in muscle thickness andlean body mass that were either equivalent or insignificantly less than the results generated by participants taking whey protein.

Are Plant-Based Proteins Good for You?

When it comes to plant-based proteins (and the most popular myths about them), there's almost always more to the story than what meets the eye at first glance! An accurate combination of plant-based proteins can work as complete proteins and provide your body with the required nutrients.

Contrary to popular opinion, plant proteins do not contain excessive amounts of carbs than whey proteins. In fact, they may be just as good as animal proteins for muscle building, if not significantly better.