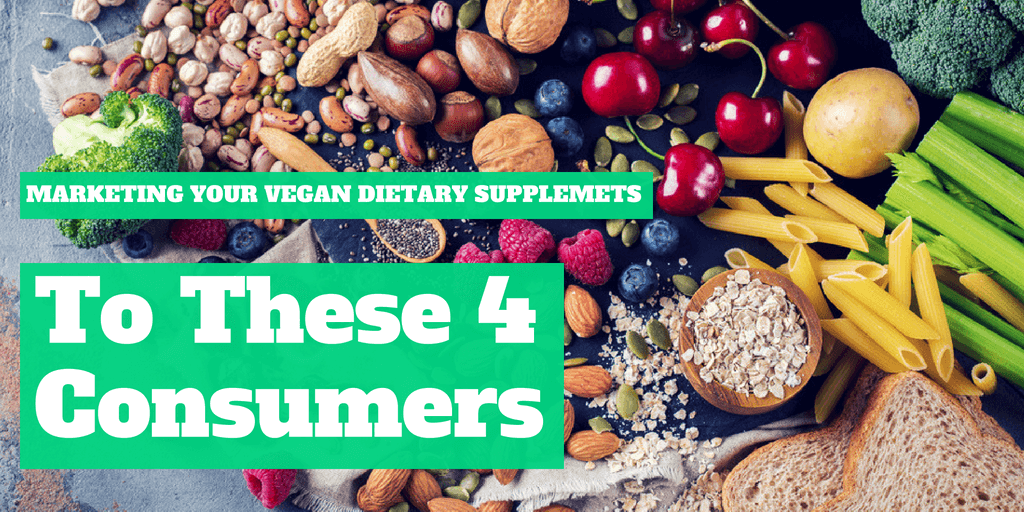 Market Your Vegan Dietary Supplements to These 4 Consumers

Whether it's for ethical, dietary, or environmental reasons – it looks like more and more American (and global) consumers are turning to veganism or vegetarianism. But in a world where food and nutraceutical trends come and go like the days of the week, it's only natural to wonder: Do vegan supplements have any real chance of becoming a long-term industry norm?

So, are vegan dietary supplements a passing fad or here to stay?

While there's no way for us to know for certain, there are plenty of factors worth taking into account. According to a study done by the Harris Research Group, nearly 5 percent of all Americans (which works out to a little less than 16 million people) identify themselves as vegetarians. Of those 16 million, nearly half (about 7.9 million people) identify themselves as vegans.

Vegan or Vegetarian: Does the Difference Matter?

For some, the distinctions between 'vegan' and 'vegetarian' can be hazy – and though we'll get to the importance (and "unimportance") of those distinctions in a minute there's another question that's been on our minds:

When it comes to crafting, marketing, and selling dietary supplements, is making the distinction between "vegan" and "vegetarian" significant?

The question still stands – does the difference between vegan and vegetarian matter?

Arguably, yes. Here's one reason why:

While all vegan products can be enjoyed by anyone – be they vegan, vegetarian, or otherwise – all vegetarian products cannot be enjoyed by vegans. With some estimates predicting that the number of vegans in the US will nearly double by 2018, supplement manufacturers who opt for vegetarian over vegan run the chance of turning away nearly 15 million buyers.

Along with millions of potential (vegan) customers, a vegan dietary supplement product has the ability to appeal to a notably large audience. Technically, a vegan supplement has the potential to be enjoyed by anyone – so why would a supplement brand owner want to limit their potential audience to roughly 15 million consumers who identify as vegan or vegetarian?

Along with following your normal process for identifying your ideal consumer audience, here are for types of consumer you may want to keep in mind when marketing and crafting your next vegan dietary supplement:

The “Traditional” Vegan - The diet of the “traditional” vegan excludes all and any products that are made from animals or derived from animal products. For these individuals, plant-derived food and products (that haven’t harmed or exploited animals in any way) are the only options.

The Vegetarian - While there are several different categories of vegetarian (which you can read about here), typically, a vegetarian is someone who does not eat meat but is willing to consumer products that contain ingredients or components derived from animals or animal products (most commonly, eggs and milk).

The “Flexitarian” - A  more recently coined term, those in the “flexitarian” category aren’t vegetarians, but they make a point of actively trying to consume less meat/animal-based products. One survey found that nearly 26% of the US population places themselves in this category. In case you don’t have the latest census data on hand – that’s nearly 83 million consumers.

No matter what particular category your vegan supplement may fall into (sports nutrition, hair skin and nail, joint and body – what ever it may be), it's important to remember that just because it's a vegan or vegetarian product doesn't mean you're limited to vegan or vegetarian consumers.