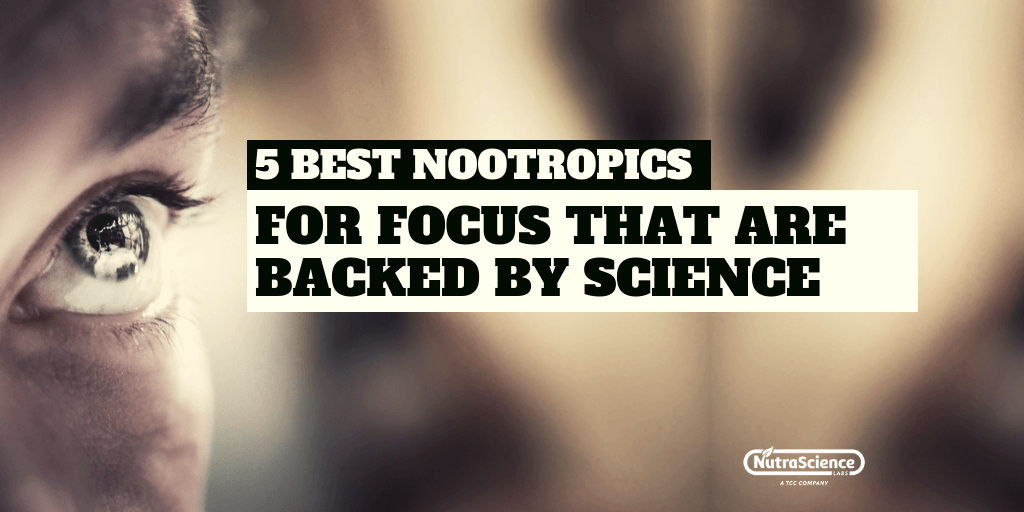 So much of our day relies on us having the focus and productivity to power through and get things done. Unfortunately, many people find themselves losing focus or being unable to concentrate for long periods of time. This can be due to a multitude of factors — not enough sleep, dehydration, or, most commonly, a deficiency in specific vitamins and nutrients.

This deficiency can lead to feeling fatigued, lethargic, and apathetic. To give yourself a boost in energy, focus, and productivity, many people are relying on supplements called “nootropics”. These supplements help encourage mental clarity and reduce inflammation (which helps negate such things as brain fog).

While technically two different supplements, when combined I have found that both of these ingredients can make for a powerful nootropic and the research agrees. In a study by Unilever Research and Development, they tested 50 mg caffeine, with and without 100 mg L-theanine. They measured the participant's word recognition, rapid visual information processing, critical flicker fusion threshold, attention switching and mood. The results were pretty interesting. The researchers found that while caffeine improved subjective alertness, the L-theanine and caffeine combination improved both speed and accuracy of performance of attention-switching and reduced susceptibility to distracting information in the memory task.

As one of the most popular ingredients found in today’s top nootropic blends, Bacopa Monnieri is also one of the best nootropics around. It has been used for centuries in Ayurvedic medicine to treat an array of different illnesses. Recently though, it has gained a following for how it is able to help increase the cognitive state of those who take it. One double-blind placebo-controlled study found that it can help improve both learning and memory.

The human brain requires choline for a variety of important neurological processes such as cell membrane stability and the production of Acetylcholine (a neurotransmitter linked to memory, mental clarity, and reasoning). In order to stimulate the production of Acetylcholine, many people take a Choline supplement as a nootropic. However, even if you don’t take it as a supplement, you may be getting Choline in other ways, such as your regular diet. Choline is found in foods such as eggs, beef liver, and even broccoli. In a study of 1,391 subjects, researchers found that higher concurrent choline intake was related to better cognitive performance.

Like Choline, you may find Ginseng in your regular diet too. That is because Ginseng is a key component in many popular teas, such as green tea. Ginseng is one of the most popular and widely researched herbs around. It had been used for hundreds of years as a traditional Chinese herb. Recent studies have found that among it being used for a variety of different things, it can help enhance your cognitive abilities. One study found that it helped improve the memory of stroke patients. Another study found that it helped improve short-term memory and minimize symptoms of ADHD.

Choline is an essential nutrient needed for health and well-being. There is evidence that choline supplementation can increase the density of acetylcholine receptors, which play a role in normal cognitive processes including attention, working memory, and executive function. It is thought that by activating acetylcholine receptors, choline can improve cognitive function.

Ashwagandha is traditional, adaptogenic herb used in the Indian system of healthcare known as Ayurveda. Although it has many applications, including anti-stress and immune enhancing effects, in animal and human research, ashwagandha or its constituents have been shown to improve memory function, possibly by helping to maintain healthy levels of acetylcholine—an important memory neurotransmitter.

Phosphatidylserine (PS) is a fat-soluble phospholipid that occurs naturally in humans. It is the most abundant phospholipid in the human brain and is important in neuronal membrane functions such as maintenance of the cell's internal environment, cell-to-cell communication, and cell growth regulation. Research has shown that PS has benefit for age-related cognitive impairment. In fact, Clinical studies show that PS improves attention, arousal, verbal fluency, and memory in aging people with cognitive deterioration.

Acetyl-L-carnitine occurs naturally in the body and stimulates membrane phospholipids synthesis, which leads to stabilization of cell membranes. This in turn suggests it may act as a neuromodulatory agent. It is also involved in numerous other functions such as protein and gene expression. It also plays a role in the production of nerve growth factor. Research has demonstrated that taking acetyl-L-carnitine orally seems to improve some measures of cognitive function and memory in elderly people with age-related mental impairment.

Ginkgo biloba is considered by many to be the granddaddy of all cognitive support herbs—and rightly so. The research on Ginkgo biloba extract (GBE) in promoting healthy cognitive functions is vast. As a matter of fact, there hundreds of published clinical studies on GBE which mostly demonstrate efficacy for cognitive function. Furthermore, research has shown that in healthy individuals, there was significant improvements in speed of information processing, working memory and executive processing attributable to the GBE. Additionally, benefits have been seen in both old and young populations.

Rhodiola rosea root is an adaptogen. This plant has been used for centuries in the traditional systems of healthcare throughout Russia, Scandinavia, and other countries where it was used to increase physical endurance, work productivity and longevity, as well as to treat fatigue, mood and promote a healthy nervous system. Human clinical research has shown that supplementation with Rhodiola improved capacity for mental work during stress, supports healthy cognitive function during stress, and reduced fatigue during stress.

Folic acid and vitamin B-12 are both critical B vitamins that perform a variety of functions in the human body. Among those functions are the roles they play in cognitive performance. For example, in one study older adults were supplemented with 400 mcg of folic acid and 100 mcg of vitamin B-12 daily. The results showed that this combination supported healthy cognitive function in older adults and promoted healthy memory performance in older adults. Furthermore, vitamin B-12 deficiency can result in memory loss, and supplementation can help prevent it. Since vitamin B-12 deficiency is estimated to affect 10%-15% of individuals over the age of 60, supplementation is certainly worthwhile.

Remember this, there are no “limitless” brain pills out there. These supplements will not replace a healthy diet or good night’s sleep. However, when combined with diet, exercise routine, and sleep patterns, they can possibly give an extra cognitive boost.

About the Author: Dan Scalco

Dan Scalco is the owner of BrainWiz.org, a website dedicated to reviewing and exploring the world of nootropics. When not working Brain Wiz, he also runs a digital marketing company and writes for Inc, Entrepreneur, the Huffington Post, and Business.com. If you want to connect with him, feel free to tweet him @DanScalco.