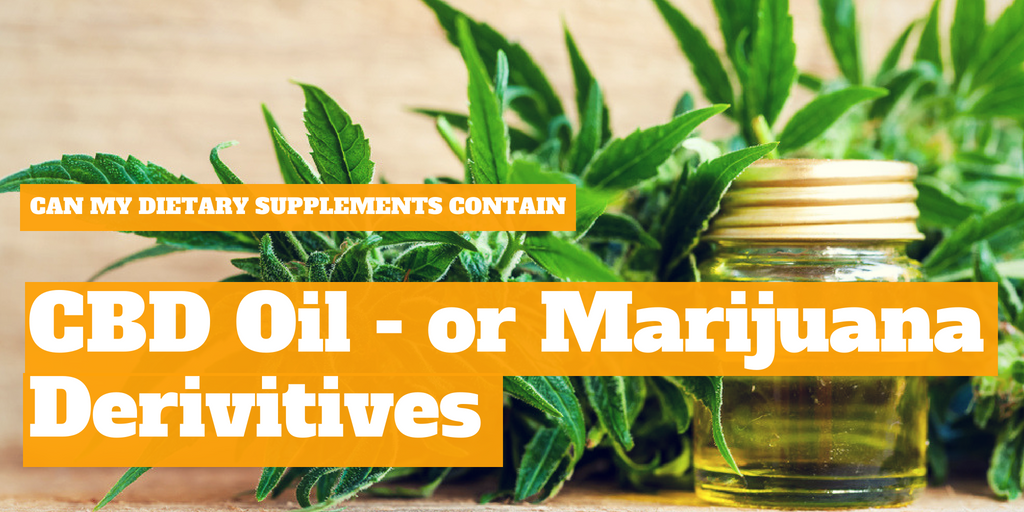 Can my dietary supplements contain CBD oil – or marijuana derivatives?

Let’s be clear, on December 20, 2018, then FDA commissioner, Scott Gottlieb, M.D., issued a press release to make the FDA’s position clear. In the release he said, “it’s unlawful under the FD&C Act to introduce food containing added CBD or THC [the major cannabinoid in marijuana] into interstate commerce, or to market CBD or THC products as, or in, dietary supplements, regardless of whether the substances are hemp-derived.”

The given reason for this was that both CBD and THC are active ingredients in FDA-approved drugs and were the subject of substantial clinical investigations before they were marketed as foods or dietary supplements.

The wording of former Commissioner Gottlieb’s statement was interesting. Specifically, it indicated that “added CBD” could not be introduced into a food or dietary supplement. This suggests that CBD isolate cannot part of a dietary supplement. But what about a plant, such as hemp, that contains naturally-occurring cannabinoids—including CBD?

The position of some legal experts is that products containing naturally-occurring cannabinoids from plant sources such as hemp, are not a problem—assuming that the products aren’t positioned as CBD products. CBD isolate, on the other hand, are a clear violation of the FDA’s position.

But Why Do So Many Brands Call Out CBD on the Label?

Given the FDA’s position, calling out CBD on the label is not without risk. At the same time, it has been noted that the FDA has not tended to go after companies that have CBD listed on their supplement labels as long as there are not egregious claims on the labels as well.

As with any dietary supplement, when brands make claims which are not allowed, those are red flags to the FDA. If the label of a CBD product (or any dietary supplement) makes claims suggesting that the product will prevent, treat or mitigate a disease or medical condition (e.g., helps reduce arthritic pain), such claims are problematic. When this has happened, the FDA can and will go after the brand for this violation.

Can You Manufacture a Dietary Supplement Formula That Contains CBD?

Can NutraScience Labs Help Me Manufacture a Dietary Supplement Formula That Contains CBD?

Not at this time. We have deemed that the regulatory risks associated with producing a CBD dietary supplement outweigh the benefits. Having said that, we are closely monitoring the situation and we may change our stance once the FDA and Congress are aligned as to how CBD products can be labeled and marketed.

Can I Use CBD Isolate?

No. Legal considerations aside, there is a significant difference between CBD isolate and full-spectrum cannabinoids. CBD is only one of many cannabinoids found in hemp—albeit the most prevalent one. Nevertheless, the presence of the other cannabinoids, alongside CBD, results in greater overall synergistic activity. This is referred to as “the entourage effect” in scientific literature. If you’re just using isolated CBD, you’re not getting the benefits of the entourage effect.

On the other hand, full-spectrum hemp extract provides a full spectrum of naturally-occurring cannabinoids—which includes a defined amount of CBD. Full-spectrum phytocannabinoids is exactly what you want, not CBD isolate.

When is the FDA's Position on CBD in Supplements Going to Change?

That is not known. However, Congress did ask the FDA to find a make it lawful for selling CBD as a dietary supplement, so the task is in process.