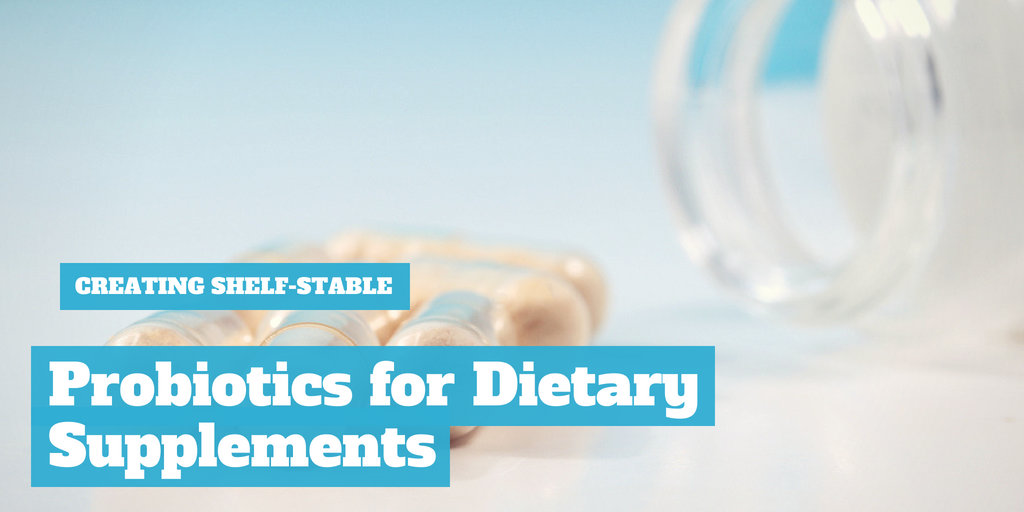 Probiotics have become an incredibly large segment of the natural products industry. Once a curious sideshow exhibit only supported by natural health “quacks,” probiotics have since grown into one of the highest velocity product segments on the market today.

Currently, the probiotics market accounts for approximately 33 billion in gross sales annually, and, according to a 2014 study by Grand View Research, Inc., the global market for probiotics has been projected to reach $52.34 billion by 2020!1

In a world where product companies have to continually find new ways to keep their formulas relevant, not including probiotics is a risky proposition. Given their current popularity, manufacturers and brand owners have been faced with an interesting challenge: How do we include them in products without allowing them to spoil?

Understanding How Probiotics Are Prepared for Supplement Manufacturing

Shelf Stable probiotics refer to those products that have been treated in such a way (e.g. microencapsulation) as to protect them from oxidation and breakdown. These are considered shelf stable. Alternatively, there are probiotic products without any protective treatment. These require refrigeration to prevent them from oxidation.

Historically, the relationship between bacteria and goods spoiling too soon has been so consistent that the English language has developed a whole family of words around it, including the word "putrid."

As per the Merriam-Webster dictionary, "putrid" and "putrification" are defined like this:

Seeing as "putrid" is the last word we want consumers to use when describing their bottle of encapsulated gut-fauna, scientists and manufacturers have been pushed to find viable solutions.

Along with the “putrification factor,” bacteria are notoriously finicky.

They’re sensitive to oxygen and moisture, don’t withstand temperature variations very well, and often die a quick death when exposed to an environment as acidic as the stomach. A study conducted in the Journal of Food Science measuring the survival rate of L. acidophilus when exposed to conditions found in the stomach and reported that over 99% of them die on contact.2

The keys to shelf stable probiotics lie in making sure that the bacterial strains have been bred, treated and manufactured with the technologies that help enhance their ability to survive in harsh conditions.

Microencapsulation is a technique that was pioneered by the pharmaceutical industry, which involves using a high-speed blender to give a reactive organism a thin coating that functions like a winter jacket for when it needs to step outside.

With a protective layer between them and the world, bacteria are suddenly robust to a much wider variety of moist and acidic environments. Here’s a perfect example: A study conducted in the International Journal of Food Microbiology found that the viability of Bifidobacterium in room temperature was increased 1000% after microencapsulation with gum acacia.3

Typically, frozen bacteria don’t like to multiply, are less likely to mix with other ingredients, and are better suited to withstand the vagaries of the manufacturing process – which is good news for those looking to manufacture products containing probiotics. There's just one small problem: Bacteria don’t like to be frozen.

The freezing process damages the bacteria's cell walls, rendering them inert. When we freeze dry them, we want to preserve them for future life, not embalm their dead bodies. Fortunately, cryoprotectants can help us prevent the death by nano-icicle that so easily befalls our probiotic friends.

"Cryoprotectant" is a fancy word for any substance that can act as cellular anti-freeze, ultimately allowing cell walls to withstand cold temperatures without breaking. Sugars happen to be some of the most popular cryoprotectants. According to research, one of the most effective cryoprotectants is trehalose, a naturally occurring sugar that is frequently made by living organisms specifically because it allows cells to go from cold-to-hot-to-cold again and live to tell the story.4

Trehalose modifies the hydrogen bonds found in water, which prevents it from entering cells as it normally would, effectively putting cellular material in a cage and protecting it from being stabbed to death by the previously referenced nano-icicles.4

People are justifiably skittish about genetically engineering many plants and animals, but when it comes to bacteria we should cheekily rejoice in the fact that we can program these micro-bugs to express a wide variety of traits they weren’t evolved to carry in the first place. After all, the healthiest bacteria aren’t necessarily optimized for life in our tummies.

A great example of genetic modification done right is Lactobacterium. Research suggests that the health benefits that they offer are nothing less than expansive, with substantial evidence supporting the claim that they support immunity, encourage a healthy inflammatory response, and enhance our mood.5 The catch? They happen to dislike sudden changes in temperature (such as those that tend to occur when traveling from a 65-degree room to the 98-degree acidic sauna that is the human stomach).

Fortunately for us, Lactobacterium bacteria and others like them can be bred to express a protein called GroESL, which allows cells to survive the stress response that comes from extreme temperatures. It’s often found in bacteria that live in weird places, like the polar ice caps or inside a volcano.6

It Can Be Done, Just Be Careful

Including probiotics in a formula makes good business sense, and it’s entirely possible.

The logistics are important, so make sure you’re able to get good documentation on how the strains are grown, prepped and preserved before you include them. The details matter.

But if you’re losing sleep at night over whether you’re creating a product that’s guaranteed to go rotten the minute it’s opened...relax! There’s no reason this should be the case as long as the proper steps are followed.

For more information on how you can manufacture a high quality probiotic formula that's custom manufactured to your specifications, contact the pros at NutraScience Labs. Minimums start at only 1,500 bottles. Call now to speak with a live person or send us your request to receive a free nutraceutical manufacturing price quote.

About the Author: Jonathan Bechtel

Jonathan Bechtel has been the owner of Health Kismet, a nutrition company that manufactures and markets nutrient powders to aid digestion, cognition, and mood support since 2011. He studied nutritional biochemistry at The Ohio State University and loves basketball, the Pacific NW, and every aspect of the natural product industry.

3 Mood-modulating Nutraceuticals You Need to Know About