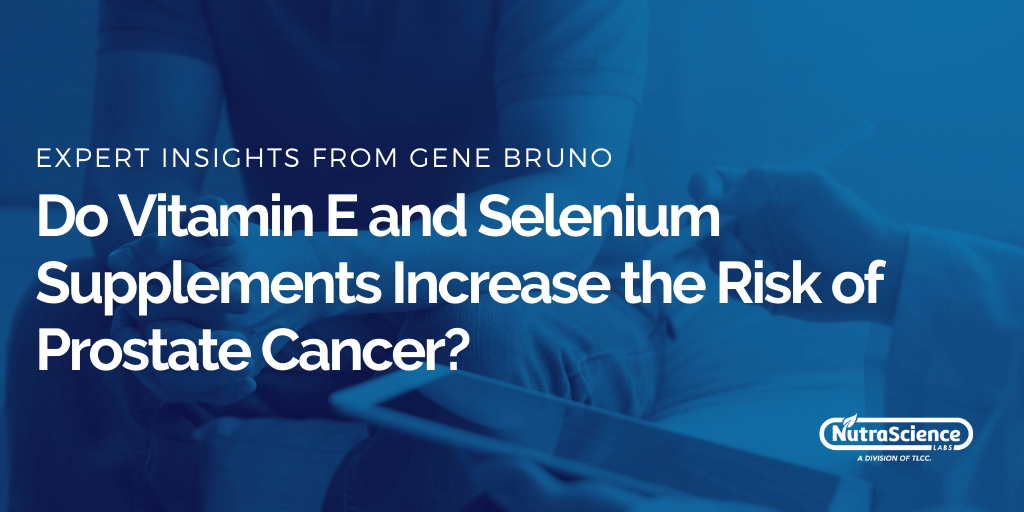 The following blog by Gene Bruno, MS, MHS, RH(AHG) was written in response to an article published on Yahoo on November 29, 2021. The article entitled "Taking Too Much of This Supplement Makes Your Cancer Risk Soar," cites the results of a 2014 study published in the Journal of the National Cancer Institute which found that taking too much selenium and vitamin E raised the risk of being diagnosed with cancer.

A 2008 study [i] called “Selenium and Vitamin E Cancer Prevention Trial" (SELECT) involved 35,533 men randomly assigned to receive either: 1) selenium (L-(+)-Selenomethionine) plus synthetic vitamin E (dl-alpha-tocopheryl acetate), 2) selenium plus placebo, 3) synthetic vitamin E plus placebo, or 4) two placebos. When originally published in 2008, the results indicated that after almost five and half years, no significant differences were observed between any of the groups in relation to prostate cancer risk.

A 2011 Analysis of the SELECT Study

However, an analysis of the study’s participants published in JAMA [ii] in 2011 indicated that synthetic vitamin E supplements alone were associated with a 17% increase in the risk of prostate cancer, but that no increase in risk was observed in the combination selenium-vitamin E group.

A 2014 Analysis of the SELECT Study

Subsequently, a case-cohort study published in 2014 [iii] analyzed data from 3,117 men in the SELECT study to determine if there were any additional findings. Here were the results:

Okay, now let’s look at some other research.

Let’s take a look at a case-control study [iv] within a prospective study of over 50,000 male health professionals in the U.S. Results were that there was a significant inverse relationship between selenium status in the body and the incidence of prostate cancer cell development. Individuals whose selenium status was consistent with an average dietary intake of 159 mcg/day of selenium daily had a 65% lower incidence of risk of prostate cancer cell development compared to those whose selenium status was consistent with an average intake of 86 mcg/day. Similar results were seen in other studies that examined selenium intake and the incidence of cancer cells from the lung [v] [vi] and liver.[vii]

A placebo-controlled intervention study that was designed to look at the effect of vitamin E supplementation on lung cancer development noted a 34% reduction in the incidence of prostate cancer in smokers given daily supplements of 37.5 IU/day synthetic vitamin E.[viii] A meta-analysis that combined the results of this study with three other randomized controlled trials associated vitamin E supplement use with a 15% lower risk of prostate cancer.[ix]

Shedding Some Light on These Studies

Confused? If so, I’ll try to shed some light on these studies.

In my opinion, what the JAMA analysis really shows is that men should take selenium with their vitamin E. In fact, the JAMA analysis is reminiscent of the flawed 1994 study in which smokers using beta-carotene were thought to be at a greater risk of lung cancer,[x] although a more thorough follow-up analysis which looked at the diets and other dietary supplements taken, revealed that the smokers' actual danger was due to low total antioxidant levels; not to the fact that they took beta-carotene.[xi] This makes sense given the fact that antioxidants function interdependently, and so should be taken together. This is consistent with prior comments from Dr. Duffy MacKay of Council for Responsible Nutrition (CRN) about the JAMA analysis: "This reinforces the theory that vitamins work synergistically and that drug-like trials of nutrients, when used in isolation from other nutrients, may not be the most appropriate way to study them." [xii]

From my perspective, this is also a clear indication that nutrients like selenium and vitamin E should be taken in reasonable doses, without taking too much of any single one. Taking these nutrients together makes sense, but they need to be taken in the right balance. In my opinion (based on other research), appropriate doses are up to 100 IU (67 mg) of vitamin E, and up to 100 mcg of selenium.

[x] Authors not listed. The effect of vitamin E and beta carotene on the incidence of lung cancer and other cancers in male smokers. The Alpha-Tocopherol, Beta Carotene Cancer Prevention Study Group. N Engl J Med. 1994;330:1029–35