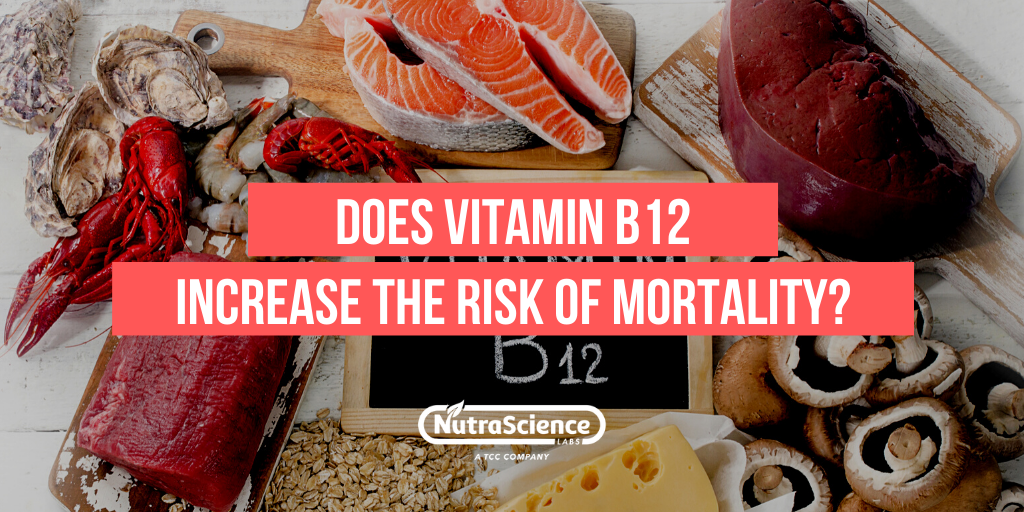 Does Vitamin B12 Really Increase the Risk of Mortality?

Author's Note: This blog post was written in response to a digital article published by Insider.com on February 19, 2020. The basis of the article was information pulled from a study published in the journal JAMA Network Open. The findings of the study concluded that high levels of B12 were associated with an increased risk of early death. Later in her article, the author cited additional sources that claimed vitamins and supplements were "a waste of money."

Media sources with an anti-supplement bias are currently having a field day. The reason? In the January 3, 2020 JAMA Network Open,[i] scientists led by Jose Flores-Guerrero and Stephan Bakker, University of Groningen, the Netherlands, reported that people in the study with the highest levels of vitamin B12 in their blood were more likely to die over the next eight years. What the media sources are failing to mention, however, is that the researchers were not clear as to whether the elevated levels are a marker of underlying disease or a cause. Let’s explore that further.

Researchers found that participants within the highest quartile of vitamin B12 plasma concentrations (i.e. those who were more likely to die) were also more likely to be older, have a higher BMI, higher blood pressure, higher concentrations of total cholesterol and glucose, and higher urinary albumin excretion rates (which may be reflective of kidney damage). In other words, the people with the highest vitamin B12 levels also had a number of health issues which also are associated with a higher risk of mortality.

No Difference with B12 Supplementation

Now consider that the researchers did not see any material difference when they included people in the study who supplemented with vitamin B12. To be clear, there was no increased risk when people supplemented with B12. For a nutrient that is supposed to be associated with increasing mortality rate, that’s kind of odd, right?

So, at the end of the eight years, 226 people had died and, compared with those in the lowest plasma B12 quartile, those in the highest quartile were 73 percent more likely to be in this group. After adjusting for age, high blood pressure, and markers of kidney disease, the risk was closer to 25 percent. But...and a big but it is...no one cause of death emerged. In fact, the authors point out that elevated B12 levels may indicate liver damage or chronic kidney disease, suggesting an effect of ongoing disease rather than a cause. In other words, the high B12 levels may have been caused by the body not being able to process B12 properly due to a liver or kidney disease—not due to a high B12 intake.

This has been found in other research where elevated plasma vitamin B12 concentrations have been found in patients with cancers and with liver, kidney, autoimmune, and infectious diseases. [ii] [iii] For example, greater numbers of leukocytes in hematological malignancies increase haptocorrin production and release into the circulation [iv] , which subsequently binds to vitamin B12, increasing plasma concentrations. Moreover, increased hepatocyte (liver cell) turnover or damage may lead to greater leakage of vitamin B12 stored in the liver, also resulting in higher vitamin B12 concentration in plasma.[v]

Conclusion: Vitamin B12 is An Innocent Bystander

The fact is, vitamin B12 is likely an innocent bystander, which some anti-supplement factions of the media are falsely accusing of increasing mortality risk. This becomes even more likely when considering that the U.S. Food and Nutrition Board (of the Institute of Medicine) has not set a tolerable upper intake level (UL) due to the fact that no toxic or adverse effects have been associated with large intakes of vitamin B12 from food or supplements in healthy people.[vi] Doses as high as 2 mg (2,000 mcg) daily by mouth have been used to treat pernicious anemia without significant side effects.[vii]

Want more insights from Gene? Check out his other articles published on our blog!

[i] Flores-Guerrero JL, Minovic I, Groothof D, et al. Association of Plasma Concentration of Vitamin B12 With All-Cause Mortality in the General Population in the Netherlands. JAMA Netw Open. 2020 Jan 3;3(1):e1919274.