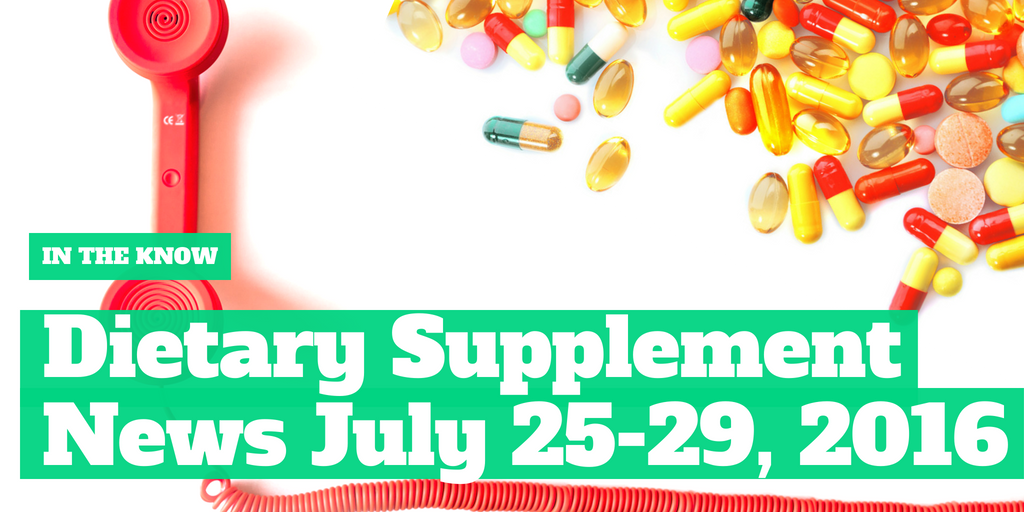 Are you in the know? We're discussing some of the supplement stories and news that captured the nutraceutical industry's attention between Monday, July 25th and today, Friday, July 29th.

While there were other stories and happenings this week, here are the ones that caught our attention.

Especially for those who aren't fortunate enough to snag a ticket or booth space at a given trade show or expo, the days and weeks following the event are chock-full of recaps and "best of" lists worth reading.

IFT16, which is the Institute for Food Technologists' annual expo, was held in Chicago, IL from July 16th to the 19th. In the days since the expo the web has been a was with Grade-A coverage and recaps. Here are some of our favorite highlights.

Over the several pieces written by Nutritional Outlook's Judie Bizzozero, Clean Label Really is the New Norm does an awesome job of highlighting what almost every IFT-recap has identified as a key takeaway – clean labeling looks like it's here to stay.

Along with bringing in a panel of random consumers to discuss what they look for in products and what they believe clean label means, industry expo-goers were discussing the subject near constantly. To borrow Bizzozero's words:

Clean label is no longer just a thing for the Whole Foods and artisan crowd—it’s becoming an a demand from the everyday consumer, and the food industry needs to start doing a better job of educating the masses on what sodium chloride is and the differences between high fructose corn syrup (HFCS) and corn syrup, or come up with some new functional alternatives with recognizable names.

No matter which way you cut it, it looks like clean label is here to stay.

Also coming out of IFT16 was this excellent coverage of the Federal GMO law and its implications (along with some reaction from those attending IFT) by Nutritional Outlook's Jennifer Grebow.

For those of you who may have lost track, earlier this month Congress passed what's set (though not guaranteed) to become the first federally mandated GMO-labeling law – Biotech Labeling Solutions Act (S. 764).

If passed, this law would be a leveling factor so far as GMO-legislation is concerned – ultimately overriding any existing state-level legislation (like the Vermont bill).

According to Grebow, the reaction from those attending IFT mirrored the overall response to the bill:

At July’s Institute of Food Technologists Annual Meeting & Food Expo (IFT), I asked companies how they felt about the law. Reactions were fairly positive. Most pointed to the federal standard as beneficial. Nancy Gaul, senior category manager of health, wellness, and dairy for Tate & Lyle (Decatur, IL), said, “One thing that we hear from customers that is a positive is the fact that it’s a federal law. The idea of having different states creating their own laws is something that the industry, from what we hear, didn’t want to happen.”

While there may be a very good chance of the Biotech Labeling Solutions Act becoming law, this chances that the GMO-labeling conversation will end here seem highly unlikely.

Arguably, one of (if not the most) significant aspect of the passage of this bill will be the fact, as the quote within the quote points out, that GMO-labeling will be in the hands of the federal government, not individual state governments.

Why is this significant? Among other things, having a federally-mandated standard will mean that, more likely than not, manufacturers and other industry professionals won't have to the packaging or ingredients of a single product to meet the regulatory demands of multiple states – saving all who may be involved an incalculable amount of resources and effort in the hypothetical long-term.

Which stories captured your attention?

Our industry's one where something's always happening – more than can be covered in a single sitting. So we want to know – which pieces of nutraceutical and dietary supplement news captured your attention this week?