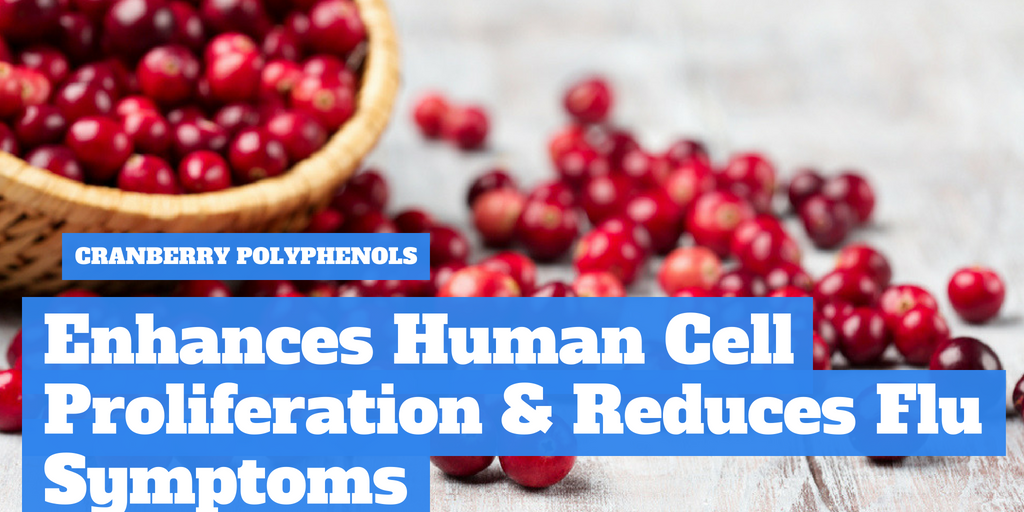 This Research brief is summarized from a published clinical study. All the information and statistics cited below were taken directly from the original publication piloted by Meri P Nantz et al.1

Cranberries and cranberry juice are known to keep the urinary tract healthy. It is known to help reduce inflammation, minimize the growth of pathogens, and has also been shown to enhance the production of anti-lymphoma antibodies. Recent studies show that consuming cranberry juice may help to reduce the recurrence of urinary tract infections (UTI) in women who are prone to such infections.

The objective of this study was to determine if a polyphenol-containing fraction of cranberry would have immuno-modulating activities in humans.

A total of 54 healthy subjects, 17 men and 37 women, were recruited to participate in a 10-week trial. Participants were not allowed to begin the study if they were ill at the time of the first blood draw. A predefined level of compliance was consumption of 80% of the allotted juice.

The study was conducted between March and May of 2009 to coincide with the normal cold and influenza season. Subjects were randomly assigned after an initial baseline fasting blood draw to either receive the cranberry juice or the placebo. Since the study was blind, subjects were unaware of which group was receiving the placebo. Subjects were given bottles containing the juice and were instructed to bring back all empty bottles at the end of the study. They were told to fill out a daily illness log to document any cold-related symptoms.

After 10 weeks, the participants returned for a final blood draw and were requested to complete an exit questionnaire.

The first blood sample collected was a fasting blood sample given by the subjects who had not eaten for 12 hours. All samples were processed between 2 hours of collection. The mononuclear cell layer was removed and washed twice with RPMI 1640. Cell pellets were then re-suspended in RPMI 1640 and counted on a hemocytometer.

Culture of PBMC for Proliferation and Cytokine Production

On day 0, 1.0 x 106 PBMC in RPMI 1640 were seeded into two wells. Phytohemagglutinin was added to one set of wells while the other was brought to volume with RPMI 1460. Both plates were incubated at 37oC in a humidified 5% CO2 atmosphere. After 24 hours, supernatant fluids from one plate were harvested and frozen at -80oC for future cytokine analysis. On day 3, human recombinant was added to the second plate and incubated till day 6. Cells were then harvested and processed for flow cytometry.

PBMC were analyzed by flow cytometry on days 0 and 6 of culture, using cell surface markers for identification. To determine proliferation changes the fold change of individual subjects was calculated as the ratio of numbers of cultured cells to uncultured cells. If no proliferation occurred during that time the ratio would equal 1:0. Antibodies were obtained from eBioscience Inc. and were used to detect specific cell types.

Levels of cytokines secreted by PBMC in culture for 24 hours were quantified using a Human Cytokine Multiplex Immunoassay Kit. The fluids were thawed on ice and used undiluted in the assay. Final absorbance was measured at 450nm. All values are expressed as pg/ml.

The rate of florescence decay was monitored over time. Antioxidant activity in protein free sera was determined using ORAC assay. Serum samples for quality control were prepared in our lab and were used in each assay plate to determine variability.

For cytokine and immune cell measures a non-parametric Wilcoxon/Kruskal-Wallis Rank sum test was performed. Illness and symptom data was analyzed by logistical regression with a generalized linear model. A sub-group analysis of all primary indices was performed.

Out of 54 individuals who enrolled, only 45 completed the study. All participants consumed at least 80% of their allotted beverage. All participants in the placebo group thought they were drinking the placebo while only 5 in the other group guessed that they were drinking the actual cranberry beverage. The total incidence of colds and influenza were not statistically different between the two groups. However, the proportion of symptoms was lower in the non-placebo group.

The T-cells showed an improved ability to proliferate in culture after the cranberry juice was consumed. We propose that T-cell proliferation is a surrogate marker for immune function. Although data specifically regarding T-cells is lacking, we hypothesize that we measure changes in blood immune cells because they migrate after they have interacted with luminal bioactive compounds in the intestine.

Changes in immune function may be responsible for a reduced number of cold and influenza symptoms. Although the incidence of colds and influenza were similar between the two groups, the total number of symptoms was lower after consuming the cranberry beverage. Cranberry proanthocyanidins have been suggested as being anti-inflammatory in in-vitro studies.

Daily consumption of a cranberry beverage containing cranberry polyphenols for 10 weeks was effective in increasing the proliferation response of T-cells. These physiological changes could be, in part, responsible for our beneficial health outcome, a reduction of the number of illness symptoms.