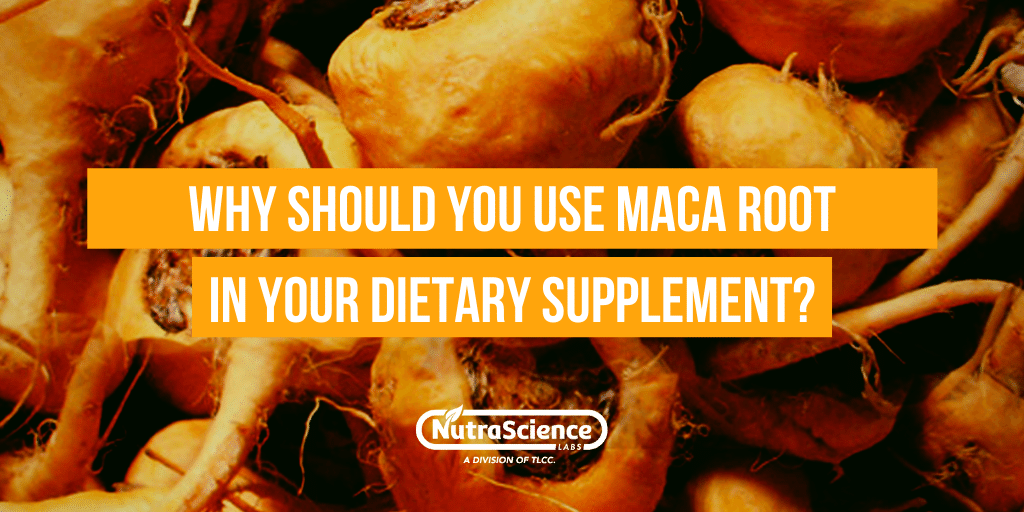 Why Should You Use Maca Root In Your Dietary Supplement?

If you’re one for keeping up with the latest health and wellness news, then chances are maca (not to be confused with the popular green tea powder “matcha”) has made its way across your radar. After reading this article, you'll understand why you should use maca root in your dietary supplement product.

Maca root (Lepidium meyenii) is a Peruvian botanical which has been used successfully to increase energy levels, to improve fertility and as an aphrodisiac, for menopause and menstruation, and for a variety of other historical uses. Now, Maca has moved into the lexicon of herbal medicine in North America, so we can now enjoy its benefits as well.

Maca is a hardy perennial plant cultivated high in the Andean Mountain at altitudes from 11,000-14,500 feet. Maca was domesticated about 2000 years ago by the Inca Indians. To the Andean Indians, Maca is a valuable commodity. Because so little else grows in the region, Maca is often traded with communities at lower elevations for other staples like rice, corn, and beans. The dried roots can be stored for up to seven years. Native Peruvians have traditionally utilized Maca since before the time of the Incas for both nutritional and medicinal purposes.[i]

What is Maca Used For?

This Peruvian botanical has been used successfully to nutritionally support and promote energy levels, to improve fertility and as an aphrodisiac, for menopause and menstruation, and for a variety of other historical uses.

Let's dive into each one of these benefits in more detail.

Maca vs. Ginseng for Energy

One of the primary Maca root benefits is its functionality as adaptogen—a substance which helps the body adapt to a variety of situations. Some adaptogens, like Ginseng, have an ability to promote energy. Maca is such an adaptogen. As a matter of fact, due to its energizing properties this plant is also referred to as Peruvian Ginseng, [ii] [iii] [iv] although Maca is not in the same family as ginseng. Nevertheless, it has similar energizing properties.

Maca’s nutritional value may contribute to these. It is rich in sugars, protein, starches, and essential minerals, especially iodine and iron.[v] [vi] [vii] The nutritional value of dried Maca root is high, resembling cereal grains such as maize, rice and wheat. It has 59% carbohydrates, 10.2% protein, 8.5% fiber and 2.2% lipids.[viii] It is rich in sterols and has a high mineral content as well.[ix]

In addition to its rich supply of essential nutrients, Maca contains alkaloids, tannins and saponins.[x] [xi] Alkaloids are also present in minute quantity, but have not yet been quantified.[xii]

Perhaps of greatest significance are the macamides and macaenes which have been standardized at a level of 0.6%. These appear to be that primary active compounds in Maca.

More than 20 years ago, in his newsletter, Phil Steinberg's Cat's Claw News, Phil Steinberg discussed Maca’s traditional use to increase energy, stamina and endurance. He then commented on his personal experience with Maca:

“March of this year I attended the Natural Products Expo West in Anaheim, California. At the show, I was given a sample bottle of Maca to use while I was there. I was amazed at how I was able to work long hours maintaining a high energy level throughout the show. I took approximately 1,000 mg of Maca three times a day along with my usual amount of Cat's Claw.”[xiii]

Maca has been used medicinally for centuries to enhance fertility in humans and animals.[xiv] [xv] [xvi] [xvii] [xviii] Soon after the Spanish Conquest in the South America, the Spanish found that their livestock were reproducing poorly in the highlands. The local Indians recommended feeding the animals Maca and so remarkable were the results that Spanish chroniclers gave in-depth reports.[xix]

Even Colonial records of some 200 years ago indicate that payments of roughly 9 tons of Maca were demanded from one Andean area alone for this purpose.[xx] [xxi] Maca root fertility enhancing properties were supported clinically as early as 1961, when researchers discovered it increased the fertility of rats.[xxii]

Hugo Malaspina, M.D., a cardiologist practicing complementary medicine in Lima, Peru, has been using Maca in his practice for ten years Dr. Malaspina first found out about Maca through a group of sexually active older men who were taking the herb with good results.

"One man in this group started taking Maca and found he was able to perform satisfactorily in a sexual relationship with a lady friend. Soon everyone in the group began drinking the powdered Maca as a beverage and enjoying the boost that the root was giving their hormonal functions. I have several of these men as patients, and their improvement prompted me to find out more about Maca and begin recommending it to my other patients."[xxiii]

Chicago physician Gary F. Gordon, former President of the American College for Advancement in Medicine, is also a Maca supporter. "We all hear rumors about various products like Maca," he says. "But using this Peruvian root myself, I personally experienced a significant improvement in erectile tissue response. I call it nature's answer to Viagra. What I see in Maca is a means of normalizing our steroid hormones like testosterone, progesterone, and estrogen. Therefore, it has the facility to forestall the hormonal changes of aging. It acts on men to restore them to a healthy functional status in which they experience a more active libido."[xxiv]

A chemical analysis conducted in 1981 showed the presence of biologically active aromatic isothiocyanates, especially p-methoxybenzyl isothiocyanate, which have reputed aphrodisiac properties.[xxv] Initial analysis of Maca indicate that the effects on fertility are a result of the glucosinolates.[xxvi] [xxvii] [xxviii]

Traditionally Maca has been used menstrual irregularities and female hormonal imbalances including menopause.[xxxi] As Maca has become increasingly popular, its use has spread to medical practices.

In the Townsend Letter for Doctors, physicians commented on the therapeutic uses of Maca. Hugo Malaspina, M.D., a cardiologist practicing complementary medicine in Lima, Peru, has been using Maca in his practice for years.

He commonly recommends Maca to women experiencing premenstrual discomfort or menopausal symptoms. "There are different medicinal plants that work on the ovaries by stimulating them," he says. "With Maca though, we should say that it regulates the ovarian function."

Dr. Malaspina further notes that "Maca regulates the organs of internal secretion, such as the pituitary, the adrenal glands, and the pancreas. I have had perhaps two hundred female patients whose perimenopausal and menopausal symptoms are alleviated by taking Maca."[xxxii]

Maca has a history of use for women’s sexual function. Maca’s fertility-enhancing properties and also its stimulant effect were first described in 1653.[xxxiii] Field researchers have since reported that, in Peru, maca has been used for medicinal purposes and as a source for energy, stamina, and endurance, and has been used as an aphrodisiac and tonic for postmenopausal problems.[xxxiv]

In 1964 Leon[xxxv] reported that Maca was currently eaten by Indian and white women who want to have children, and is sold in the market for this purpose. In addition, modern, human clinical research has also shown benefits.

The results were that maca supplementation reduced psychological symptoms, including anxiety and depression, and lowered measures of sexual dysfunction.

Another randomized, double-blind, parallel group dose-finding study[xxxvii] examined the effect of maca supplementation on sexual dysfunction caused by SSRI (anti-depressant) drugs. Doses of 1.5 grams and 3 grams per day were compared.

The results were that libido improved significantly (P<0.05) in the group receiving 3 grams of maca. Other placebo-controlled studies have shown similar benefits in sexual interest and function when maca was supplement to postmenopausal women.[xxxviii] [xxxix]

Note: since 3-3.5 gram is probably a significant amount of maca root to supplement with for many women, the use of 270 mg of maca root extract standardized for 0.6% macamides and macaenes will provide equivalent activity in a more manageable daily dose.[xl] [xli] [xlii] [xliii]

Maca is growing in world popularity due to its energizing effects, fertility enhancement and aphrodisiac qualities. Other traditional uses include, promoting mental clarity, and helping to reduce fatigue.[xliv] [xlv]

Aguila Calderon, M.D., is the former Dean of the Faculty of Human Medicine at the National University of Federico Villarreal in Lima. He says, "Maca has a lot of easily absorbable calcium, plus magnesium and a fair amount of silica."

According to USP[xlvii], macamides and macaenes may be considered appropriate marker compounds for standardization of this plant.

Now, it should be noted that there are generally considered to be four primary types of Maca: yellow Maca, black Maca, red Maca and purple Maca. Research was conducted on these four different types indicate that the total macamide and macaene content can vary considerably.[xlviii]

Now that you know the benefits of maca and who can benefit from it, why not create your own dietary supplement formula containing maca root?

The team at NutraScience Labs possesses more than 120 years of dietary supplement contract manufacturing experience and has created more than 2,300 nutraceutical products. We also offer award-winning, in-house packaging, labeling, and fulfillment services for your convenience.

For more information on how to get started, call 855-492-7388 to speak with one of our knowledgeable representatives or request a free manufacturing price quote.

[v] Report of an Ad Hoc Panel of the Advisory Committee on Technical Innovation, Board on Science and Technology for International Development, National Research Council, 1989. Lost Crops of the Incas: Little Known Plants of the Andes with Promise for Worldwide Cultivation.

[xix] Report of an Ad Hoc Panel of the Advisory Committee on Technical Innovation, Board on Science and Technology for International Development, National Research Council, 1989. Lost Crops of the Incas: Little Known Plants of the Andes with Promise for Worldwide Cultivation.