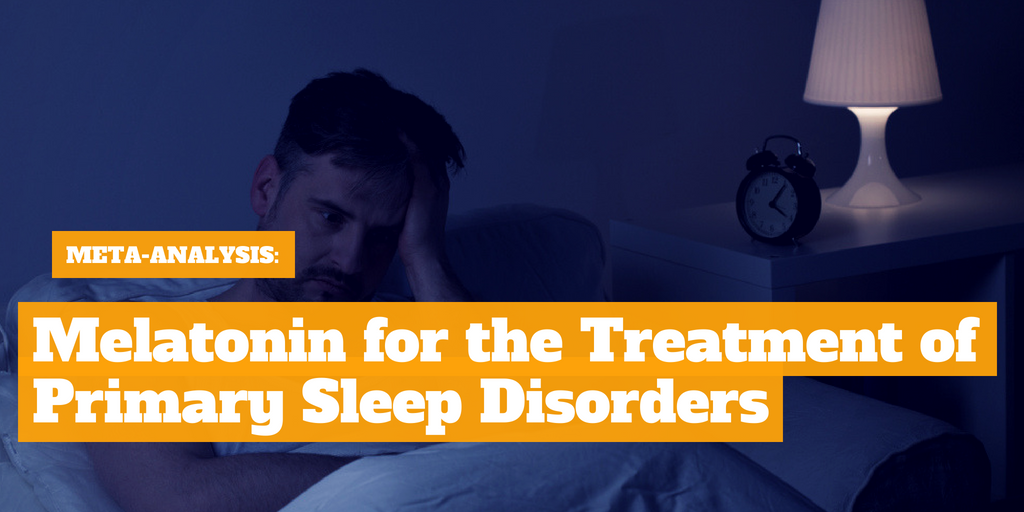 Meta-Analysis: Melatonin for the Treatment of Primary Sleep Disorders

This Research brief is summarized from a published clinical study. All the information and statistics cited below were taken directly from the original publication piloted by Ferracioli-Oda, et al.1 NutraScience Labs has restructured or paraphrased some sections of this brief in an attempt to more succinctly summarize the research.

In order to be diagnosed with a primary sleep disorder, the sleep disturbance must cause significant distress or impairment in social, occupational, or other areas of functioning. Primary sleep disorders are not associated with a medical condition, substance use or concurrent psychological disorder. Poor sleep is also associated with an increased risk of mortality, hospitalization and traffic accidents. Statistics show that 9% of Americans report having insomnia. There are numerous therapies for the treatment of insomnia ranging from psychological or behavioral therapies to medications.

Many trials have been performed to assess the efficacy of exogenous melatonin in treating primary sleep disorders. Melatonin is a hormone secreted by the pineal gland in response to variations in the circadian cycle. It has been used for the last two decades for the treatment of sleep disorders. Melatonin has little potential for dependency and has been widely utilized in the United States.

This study seeks to examine melatonin’s effects on sleep latency, total sleep time and sleep quality. It will also examine the moderating effects of measure type, dose and duration of melatonin treatment.

Selection of Studies
PubMed was searched by two reviewers using the terms Melatonin and Sleep Disorder. The search was further limited to include only randomized controlled trials and meta-analyses. All studies included were published before or on March 2012.

Inclusion Criteria
Trials were only included if they analyzed primary sleep disorders as defined by the DSM-IV, examined the effects of melatonin, were randomized placebo controlled trials, had at least 10 participants for parallel designs or 5 participants for crossover designs and were published in English.

Meta-analytic Procedures
Data was extracted using Microsoft Excel spreadsheets. The primary outcome measure was mean improvement in sleep onset latency, total sleep time and sleep quality. The difference between melatonin and placebo was examined by calculating the weighted mean difference (WMD). A fixed-effects model was used for this meta-analysis with the results for a random-effects model presented as a sensitivity analysis.

For secondary analyses, several subgroup analyses and meta-regressions were performed. Stratified subgroup analysis was used to assess the effects of type of measure (subjective/objective).  Meta-regression was performed to examine the association between melatonin efficacy in trials and continuous variables such as dose and duration.All data including information on the inclusion/exclusion of studies and extraction of data for meta-analysis is available from the corresponding author by request.

Included Studies
Nineteen studies involving a total of 1683 subjects were included in this meta-analysis. From the search on PubMed and related bibliography 268 studies were selected.

Meta-regressions were performed to assess the relationship between effect, duration and dose. Higher melatonin doses and longer duration trials were related to significant greater effect sizes on sleep latency and total sleep time. These findings suggest that there is no evidence of the development of tolerance with melatonin use.

In spite of these limitations, the meta-analysis showed that exogenous melatonin administered to subjects with primary sleep disorders modestly improved sleep parameters including sleep latency, total sleep time and sleep quality. Further research is needed to examine the long-term benefits of sleep medications including the comparative efficacy of melatonin to common prescription sleep medication.