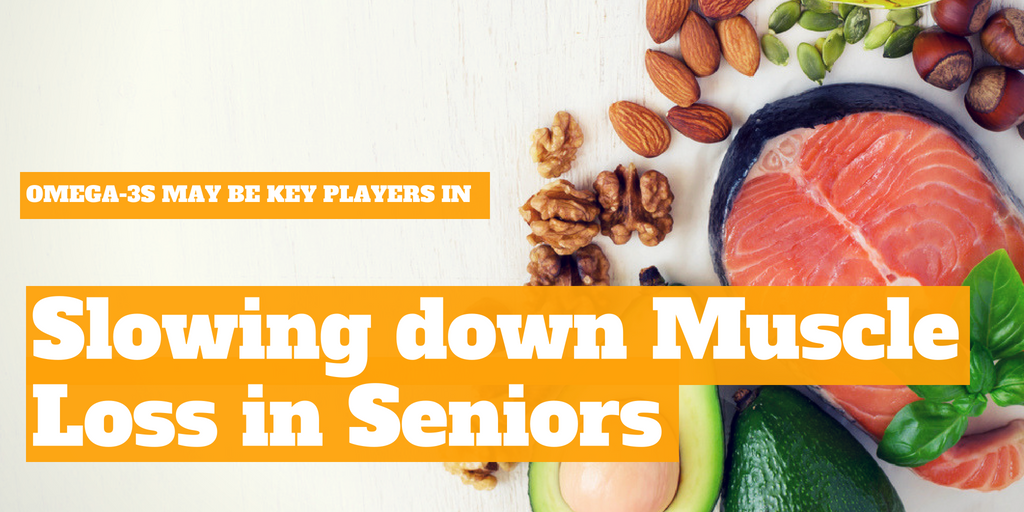 For decades, the baby-boomer generation has taken a proactive approach to health and wellness, placing a significant amount of value in a number of dietary supplements – including omega-3s! As it turns out, certain omega-3s may be key for maintaining life-long muscle health in old age.

If there's one thing that the baby-boomer generation has made clear, it's that they value their independence and mobility - especially now that many of them have made their way into their retirement years.

One of the more common components of aging, especially for those over 50 years of age, is a decrease in the quality, strength, and total mass of skeletal muscles.

In older adults, loss of muscle mass is linked with, and possibly led by, muscle weakness. Muscle weakness can make it difficult for them to carry out basic daily activities, such as climbing stairs or even getting up from a chair. Over a period of time, they get used to inactivity, which itself leads to muscle loss, at any age. This way, older people get trapped in a situation that will eventually lead to an increased risk of falls, a loss of independence, and even premature death.

How can they possibly avert this situation? Well, a study has shown that there is a correlation between omega-3 for seniors and age-related muscle loss.

Links between Fish Oil Omega-3s and Muscle Mass in seniors

According to a study performed by researchers at the Center for Human Nutrition at Washington University's School of Medicine, healthy seniors who supplement their diets with fish oil-derived omega-3 for muscle growth may see an increase in muscle function and mass.

Omega-3 for seniors: The Study

Performed as a randomized, double-blind, and controlled trial - the researchers worked with sixty volunteers, healthy men and women, who were between the ages of 60 and 85. Over the course of six months, members of the test group were given 3.6 grams of EPA/DHA omega-3-rich fish oils daily. The control group was given a corn oil placebo.

At the end of the six-month trial, researchers tested the hand-grip strength, thigh muscle volume, and average power during isokinetic leg exercises and one-repetition maximum upper- and lower-body strength for each participant – and compared the results to those that had been recorded at the start of the study.

While the researchers found no statistically significant changes in overall body mass, fat, or inter-muscle fat – they did find that for participants in the omega-3 group there had been a significant increase in thigh muscle volume, single-repetition muscle strength, hand-grip strength, as well as knee extension and flexion leading them to believe that omega-3 for seniors is a good decision.

Based on the study results, the researchers concluded that fish oil-derived omega-3 PUFA therapy “should be considered a therapeutic approach for preventing sarcopenia and maintaining physical independence in older adults.”

In the words of Bettina Mittendorfer, Ph D., one of the study's authors:

“This is an important development and has direct clinical relevance, as currently, besides vitamin D, there are no treatments good enough for the prevention and treatment of sarcopenia aside from regular exercise, which is difficult to adhere to especially in older people [...] In addition, our findings open avenues for the discovery of potential new cellular mechanism that are critical for the regulation of muscle mass and function, which we plan to pursue in the near future.”

If the results of this study on the effects of omega-3 for seniors continue to hold true, then fish oil-derived omega-3s may be able to provide baby-boomers and other 50+ consumers with a means for minimizing the effects of aging-related muscle loss.

And what does the ability to minimize the effects of muscle loss mean? Well, that has the potential to translate to a near-priceless trade-off – a higher-quality of life for a longer number of years.

Why is Protein So Expensive Now?