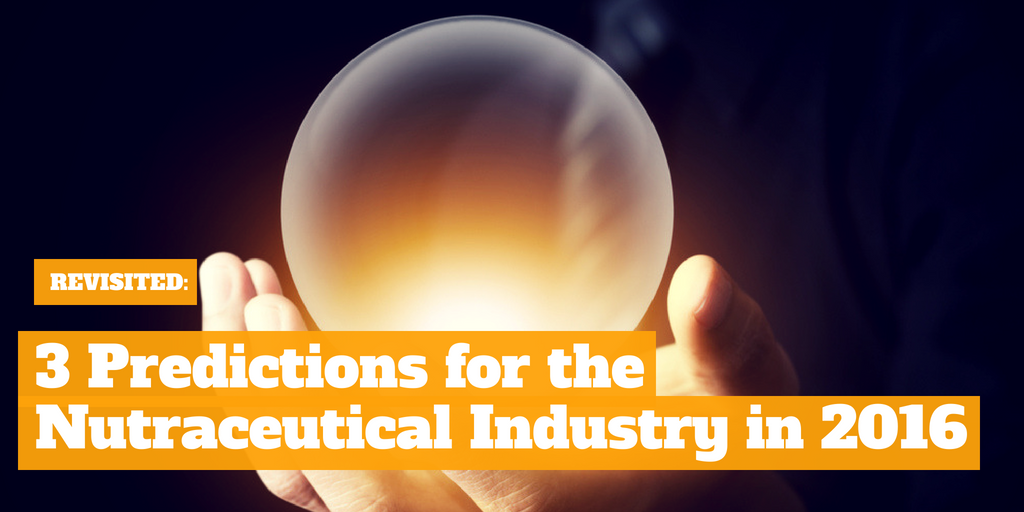 Revisited: 3 Predictions for the Nutraceutical Industry in 2016

We’re taking to a moment to revisit our top three predictions for the nutraceutical industry from September of last year to find out how insightful they really were (or weren’t).

The tradition of taking a seat in front of the crystal ball as the year comes to a close is one that we love to honor. When we sat down last September , we focused our attention on three unique areas: Industry claims and regulations, Vitamin K2, and the purchasing habits of baby boomers. Let's find out how we did!

Were we right or wrong? Reviewing Last Year’s Nutraceutical Predictions for 2016

Prediction #1: Substantiation of claims will continue to be a primary regulatory concern in the nutraceuticals industry. - Right

If you were to take the time to examine all of the dietary supplement-related warning letters that the FDA has distributed over the last five months (which is about thirty), you'd find that the most popular category of infractions was misbranding.  With nearly 20 of the letters falling under this category in one way or another, it seems as though our prediction was spot on.

Why only ‘mostly’ right? Other than being able to throw in the subtle “The Princess Bride” reference, if we rely on Google’s trends feature (one of our favorite popularity gauges), it becomes clear that part of this prediction did miss the mark.

As of today, this is the trend report for Vitamin K2:

Not bad, right? There’s no denying the Vitamin K2’s rising popularity over the last several years
or that last month, April 2016, there was as much interest in K2 as there had been in April of 2015 – when the popularity of K2 was at its highest recorded height.

Also as of today, this is the trend report of Vitamin D3:

Again – not too shabby. Clearly general interest in Vitamin D3 has seen consistent growth since late 2010. Even with the slight dip that we’re currently seeing, if the trend that’s been playing out for the last 6 years continues, we can expect to see interests shoot back up in time for the New Year (but really, that’s another prediction unto itself).

Now, for our “mostly” – let’s take a look at what both trend reports look like when charted on the same graph. Note: D3 is in blue and K2 is in red.

According to this chart, general interest in K2 most certainly has not eclipsed the general interest in D3. While K2 has seen some significant growth in interest – it doesn’t look like it will be surpassing D3 any time soon. In light of this last chart, it's only fair to label this prediction as only mostly right.

Prediction #3: Supplements for Baby-Boomers will Increase in Popularity - The Jury's Still Out - But All Signs Point to Right

Given the fact that we're only five months into the year and the fact that most research organizations will only release their consumer data towards the end of the year – the accuracy of this prediction is a little more difficult to gauge. Both those factors being acknowledged, the pieces of information that have started to role in continue to point to 'right'.

As the baby boomers continue to age, express their desire for health and wellness supplements, and flex their tremendous spending capabilities, it seems more than likely that the demand for boom-aimed supplements will continue to grow. We'll have to check back in on this prediction as the year goes on!

2016 has been a good year for NutraScience Labs' predictions! While 2 1/2 out of three certainly isn't bad, we're excited to see how the rest of this year plays out. And we're most certainly looking forward to taking another glance (or two) into the nutraceutical crystal ball before 2017 rolls around!