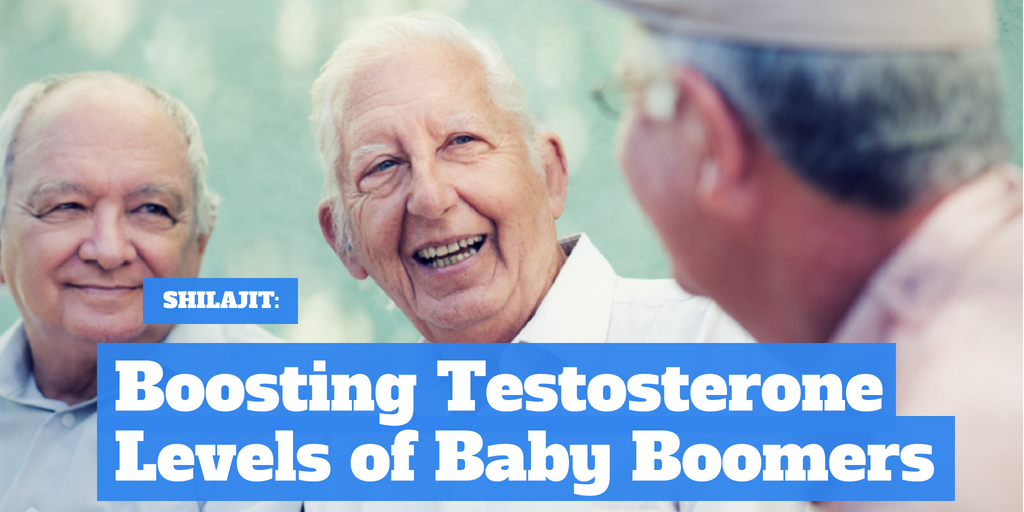 Shilajit - Boosting the Testosterone Levels of Baby-Boomers and Beyond

Just to be clear, our hypothetical 60-year-old man doesn't suffer from testosterone deficiency or "low T." His numbers, though they may be well below those of his 20-30 something counterparts, are still normal. Unfortunately, the fact that his testosterone levels would still fall within the normal range doesn't change the fact that he'd likely be afflicted by some of the most common side effects of low T – most notably a reduction in libido (which, in turn, has to potential to can interfere with romantic intimacy, shake self-confidence, and damage quality of life).

Baby boomers have a long-standing relationship with the dietary supplement industry (heck, they're the ones who brought it into being several decades ago. As the baby boomer generation continues to age, the dietary supplement industry has dedicated an incredible amount of resources and effort to helping them meet their changing needs – and the testosterone-related needs of aging men have not been ignored. Currently, one of the rising stars in this particular arena is shilajit, which has been shown, time and again, to help boost testosterone levels.

Shilajit is a pale-brown to blackish-brown secretion from sedimentary rocks found primarily in the Himalayas. It is composed of rock humus (think food hummus but made of rock and soil), rock minerals and organic substances that have been compressed by layers of rock mixed with marine organisms and microbial metabolites.4 Shilajit has been used for centuries in India’s Ayurvedic system of healthcare, especially to promote a healthy male reproductive system.5,6 In fact, shilajit has an extensive history of use in as an aphrodisiac, and its safety has been well documented based on animal and human studies.7-12

Recent Studies on Shilajit as a Dietary Supplement

In addition to its historical background of use in India, shilajit has also been the subject of modern scientific research. In one 90-day clinical trial, a purified form of shilajit called PrimaVie® shilajit was given to 28 men, and various biochemical parameters (including testosterone) were measured.13 Results showed significant (P < 0.001) improvement in various parameters. This included a 61.4% increase in total sperm count, an 18.7% decrease of semen malondialdehyde content (a marker for oxidative stress), and a 23.5% increase in serum testosterone (P < 0.001). Liver and kidney profiles measured confirmed the safety of PrimaVie® shilajit.

Both of the studies summarized above saw similar increases in testosterone levels with PrimaVie® shilajit: 23.5% and 20.45%, respectively. The similarities between the two studies suggest that PrimaVie® shilajit is likely to provide positive results for a number of male populations, especially for those who fall into the baby-boomer and older bracket. Unlike many other testosterone boosters on the market that have only been tested on significantly younger men, PrimaVie® shilajit studies have demonstrated successful results in both younger and older men.

For more information on how NutraScience Labs’ Production Specialists can help you create a high-quality, testosterone boosting supplement containing shilajit, give us a call at (844) 839-5071 or send us your request to receive a free nutraceutical manufacturing quote.