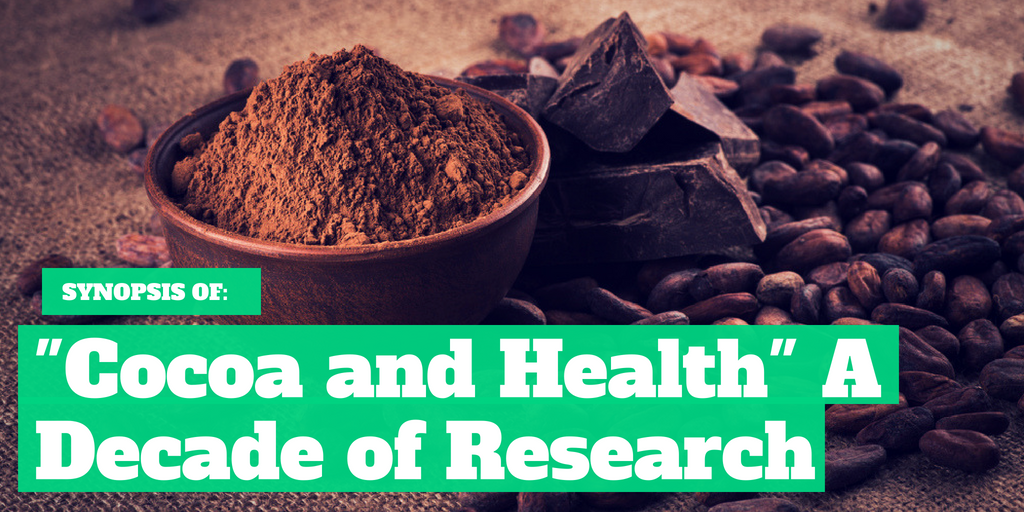 Synopsis of "Cocoa and Health: A Decade of Research"

This Research brief is summarized from a published clinical study. All the information and statistics cited below were taken directly from the original publication piloted by Karen A. Cooper et al. 1

Introduction - Why cocoa and why the focus on CVD?

What has been done in the last 10 years?

In 1999, another letter was published. This time, cocoa was compared to tea and it was observed that tea was still a major source of catechins but cocoa contributed 20%. It was also found that with 40g of black chocolate, epicatechin was absorbed into the blood.

Studies have escalated since 2000. A total of 25 studies were conducted from 2000-2007. Almost all showed positive results. There was one study that correlated a long-term intake of cocoa to lower and overall cardiovascular mortality in elderly men and another that showed an inverse relationship between chocolate intake and CVD in postmenopausal women.

After it was first demonstrated that consumption of dark chocolate led to the appearance of epicatechin in the blood, it was seen that the smaller the polyphenol, the higher the concentration in the blood and so it had a higher chance of reaching the target organ in the body. This area of research is relatively new and certain aspects have not yet been fully identified. But it is safe to say that for chocolate or cocoa to have health benefits it should have a high concentration of the smaller polyphenols.

NO concentrations have been the central target of the cocoa-CVD research. Endothelial function is positively affected by cocoa consumption leading to a lower risk of heart attacks. It also shows that LDL is less susceptible to oxidation after consuming chocolate and platelet aggravation is significantly inhibited.

How much chocolate is enough?

In all studies conducted only short term testing has been conducted and observed with regard to the effect of cocoa on health. However, in some cases, it is believed that high doses of cocoa rich chocolate consumed on a daily basis could have a cumulative effect.

Fat and sugar are also key components of chocolate and so along with the intake of polyphenols which will have a positive effect, one will have to deal with the side effects of too much chocolate.

Dark chocolate with high cocoa content is the richest in polyphenols. Harsh treatment of the cocoa bean tends to destroy the polyphenols. So, the lower the concentration of cocoa, the less is the level of polyphenols. White chocolate contains no cocoa at all. However, there has been no definitive result shown from any of the studies and research is ongoing.

Healthy and well-nourished subjects along with a limited age range would show better, more reliable results.

Well-funded studies would have more resources to redo and modify a trial should the results be null or negative. Grants are only given to studies that already show promise. However, all papers were published in reliable journals and, therefore, can be trusted.

It has already been established that cocoa is a source of dietary polyphenols. So, future research should focus more on the mechanism of action. Trails should use relevant amounts of chocolate that have been carefully defined with the appropriate proportions of cocoa.

The target of the trials should be a demographic that is under antioxidant stress or deficiencies, chronic diseases and elevated risk of CVD.