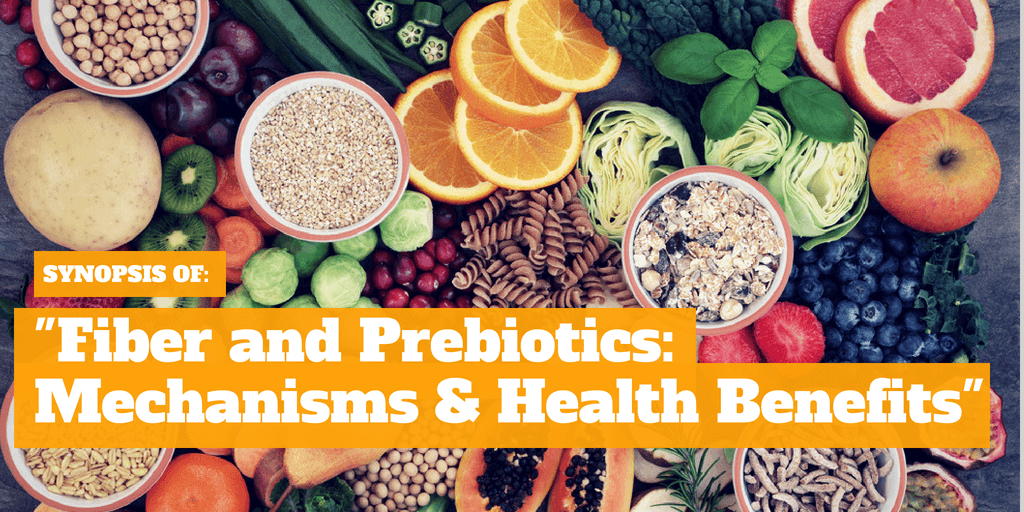 Role of Dietary Fiber and Prebiotics in Maintaining Health

Synopsis of "Fiber and Prebiotics: Mechanisms and Health Benefits"

This Research brief is summarized from a published clinical study. All the information and statistics cited below were taken directly from the original publication piloted by Joanne Slavin.1

Dietary Fiber - the term was coined in 1953, but its health benefits have been appreciated since long before then. Prospective studies show that high fiber diets are linked to less cardiovascular disease and the credit for these studies is given to Denis Burkit.

Prebiotics - although prebiotics is fiber, not all fiber is prebiotic. The accepted definition of prebiotics is, "a selectively fermented ingredient that allows specific changes both in the composition and/or activity in the gastrointestinal microflora that confers benefits."

An important mechanism of action of dietary fiber and prebiotics is fermentation in the colon and changes in gut microflora. Lactobacilli and bifidobacteria are considered beneficial due to their metabolic profile.

The colonic microflora contributes to the gut immune system and together they are responsible for preventing pathogens from entering the gastrointestinal (GI) tract. Dietary components that stimulate fermentation lead to an increase in bacterial mass, thus increasing fecal mass and having a stool bulking effect.

Fermentation also inhibits the growth of pathogenic organisms by reducing luminal and fecal pH. Low pH is responsible for the formation of toxic compounds such as ammonia, amines, and phenolic compounds. It also thwarts the activity of undesirable bacterial enzymes.

The United States currently relies on an analytical approach to determine what is or is not considered fiber.

Foods that are high in fiber, whole grains, vegetables, fruits, and legumes contain more than just fiber. It is believed that these co-passengers with fiber may provide the protective health properties of fiber, rather than the fiber itself.

Cardiovascular Disease - Epidemiologic studies suggest that sufficient fiber consumption lowers the risk of CVD and CHD through a reduction in LDL levels. Water-soluble fibers were most effective in lowering serum LDL cholesterol concentrations.

Type II Diabetes and Glycemic Control - Numerous large-scale cohort studies support a strong inverse relationship between dietary fiber consumption and development of type II diabetes. Regularly consuming the recommended amount of fiber has the potential to satisfy glucose absorption rate, prevent weight gain, and increase the load of beneficial nutrients and antioxidants in the diet, all of which may help prevent diabetes.

Laxation and Regularity - It is well recognized that fiber is important for normal laxation as it increases stool weight. In general, cereal fibers are the most effective at increasing stool weight. Wheat bran is considered the ideal kind of fiber.

Appetite control - As food moves through the upper and lower GI tract, various satiety-related hormones are released and signals are sent to the brain. Many of these gut hormones are thought to regulate satiety, food intake, and overall energy balance.

Body Weight - Prospective group studies report that people who consume higher amounts of fiber weigh less than people who consume lesser amounts. Diets that are high in fiber are typically lower in fat and energy density, both of which are helpful for maintaining a healthy body weight.

Cancer - Several large-scale studies, including some intervention trials, have suggested fiber intake is not associated with overall risk of colorectal cancer. This could be the product of the long latency period for colorectal cancer development.

Prebiotic Effect and SCFA Production - Benefits of prebiotics include improvement in gut barrier function and host immunity, reduction of potentially pathogenic bacteria subpopulations, and enhanced SCFA production. The ability to favorably alter the intestinal microflora has been demonstrated by a number of fiber and plant food sources. Fermentable fibers that don't meet the definition for prebiotics still provide health benefits via production of SCFAs. SCFAs also help regulate sodium and water absorption, and can enhance absorption of calcium and other minerals.

Immune Function and Inflammation - Some fibers may play a role in improving immune function via production of SCFAs. There is also some evidence of increased resistance to illness or infection with fiber intake. Soluble, non-viscous fiber may also be potentially useful in alleviating symptoms of inflammatory conditions, such as irritable bowel syndrome (IBS).

Infectious Diarrhea - Intake of a mixture of FOS and inulin has produced significant reductions in pro-inflammatory immune markers and a reduction in calprotectin, an abundant neutrophil protein found in both plasma and stool that is markedly elevated in patients with inflammatory bowel disease.

Bioavailability and Uptake of Calcium

Studies have shown enhancement of calcium absorption with a prebiotic intake.

Soluble and viscous fibers appear to favorably alter biomarkers of CVD, including low-density lipoprotein cholesterol (LDL-C) and C-reactive protein (CRP). There has been consistent evidence from prospective epidemiologic studies that dietary fiber exerts a protective effect against CVD.

Recently in a study in overweight adults, wheat dextrin demonstrated a progressive and significant increase in satiety and decrease in hunger feeling at doses 8 to 24 g per day which was time and dosage correlated.

The United States - The Dietary Guidelines for Americans 2010 Committee (DGAC) believes that the gut microflora do play a role in health and recognizes that consumer interest in altering the microflora is high. Additionally, the DGAC believes that investigation of the gut microflora is an important emerging area of research. The DGAC suggest that foods high in prebiotics (wheat, onions, garlic), should be consumed, as well as food concentrated in probiotics (yogurt).

European Food Safety Authority (EFSA) - The EFSA has recently published a guidance document focused on two key issues regarding the substantiation of health claims related to the gastrointestinal tract and immune system.

World Health Organization/Food and Agriculture Organization - A prebiotic is defined by the FAO as "a non-viable food component that confers a health benefit on the host associated with modulation of the microbiota".

Dietary fibers exhibit a diverse range of physiochemical properties and corresponding physiological effects. All in all, increasing fiber consumption for health promotion and disease prevention is a critical public health goal.