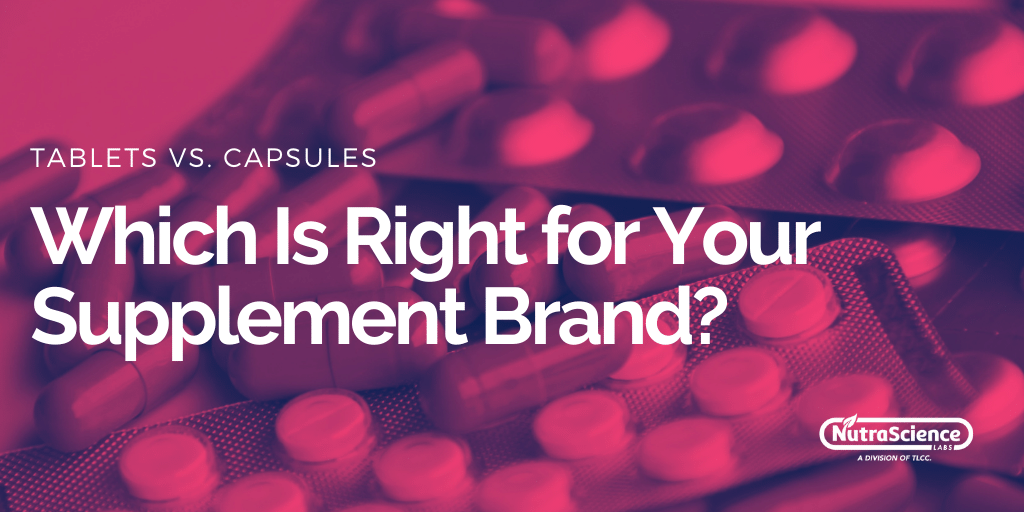 Tablets vs. Capsules: Which One is Right for Your Supplement Brand?

As an aspiring dietary supplement brand owner, you might be comparing tablets with capsules as the dose form for your product. Aside from the obvious physical differences, there are 3 key considerations you must account for when it comes to these two tried and true delivery methods:

After reading this article, you should be able to identify the key differences between tablets and capsules. I've also included some of the most frequently asked questions and answers about capsules and tablets so you can make an informed decision as to what dose form to choose for your product.

Differences Between Tablets and Capsules: What They Are, Their Pros and Cons

What is a Tablet?

Tablets are the most common medication units made by compressing one or more powdered ingredients and additives to form a hard, smooth-coated pill that breaks down in the digestive tract.

Tablets are made by compressing one or more powdered active ingredients to form a hard, solid, smooth-coated pill that breaks down in the digestive tract. In most cases, tablets also contain inactive ingredients or excipients whose purpose it is to bind all of the ingredients in the tablet together. Excipients may also be used to improve other characteristics of the tablet, such as disintegration time, appearance or even taste/flavor (in the case of chewable tablets).

Of the different dietary supplement delivery forms, tablets are most malleable in appearance. They can be round, oblong, or disc-shaped. When oblong, there are typically called caplets, the shape of which tends to be easier to swallow. Color coatings can also be used to change the tablets appearance, and special coating that prevents them from breaking down in the stomach and only dissolve after entering the small intestine, when this is desirable.

Want to know more about tablet forms for dietary and nutritional supplements? Read our blog “4 Types of Tablet Forms To Deliver Your Dietary & Nutritional Supplements” for more information.

What is a Capsule?

Capsules are a kind of medication that is enclosed in an outer shell. Once the outer shell breaks down in the digestive tract, it is absorbed into the bloodstream and metabolized like a tablet.

There are two main types of capsules: hard-shelled and soft gel.

Differences Between Tablets and Capsules

Read our blog to know the process of manufacturing capsule supplements.

The first criterion to consider is consumer preference - and when it comes to comparing capsules vs. tablets, there's a clear-cut winner in the public's eyes.

Capsugel, a capsule provider, commissioned a study [i] completed by the Povlin Research Group in 1997 to look at the preferences among consumers for dosage forms of herbals and vitamins. A total of 400 herbal users and 300 vitamin users were interviewed. Relevant results were that:

Capsugel commissioned two other studies [ii] to examine consumer preferences regarding dietary supplement and mediation delivery forms. The first study was conducted in 2002 and was followed by a duplicate study completed in 2009, which provided insight as changes in consumer habits. More than 750 consumers in 25 major U.S. markets were asked what they used, what they preferred, and what they were willing to pay more for. The findings were:

Aside from Capsugel sponsored research, other studies have also been conducted revealing the following:

Are Capsules More Easily Digested and Absorbed Than Tablets?

The next question you have to ask yourself is whether capsules are more easily digested and absorbed than tablets.

Actually, if properly formulated they should both be roughly equal. This was demonstrated in one recent study [vi] where healthy male subjects consumed choline alfoscerate tablets and choline alfoscerate softgel capsules. The results were that both dosage forms had roughly the same level of absorption.

Similar results were seen in a study [vii] in which tablets and capsules were used for medication. However, another study [viii] on a medication found that capsules had the best overall bioavailability compared to tablets.

Yet another study [ix] on a combination of micro-nutrients showed contradictory results (depending upon the nutrient) for absorption between tablets and softgel capsules.

TAKEAWAY: It seems that both tablets and capsules have good digestion and absorption. An exception, however, is with people who have impaired gastric pH conditions. For those people, capsules may be easier to digest [x].

Does Size Matter When It Comes to Capsules vs. Tablets?

Let's say you have a product requiring a 1,000 mg dose of a given nutraceutical, and let’s say that you want that 1,000 mg to be in a single tablet or capsule. That amount would typically be difficult, if not impossible, to fit in a single 00 size capsule - which is about the largest size capsule most people would be comfortable swallowing. In this case, it would make sense to use a tablet as a delivery form, since 1,000 mg would be easy to fit in a single tablet, and there are a variety of punches for tablet shape and size to accommodate a finished tablet that wouldn’t be too large to swallow. Conversely, it would require two capsules to provide the same dose.

How to Decide Whether an Ingredient Combination Goes into a Tablet or a Capsule?

If your ingredients are inert to the additives present in capsule coatings and are absorbed directly into the bloodstream, capsules are a good idea. Or, stick with tablets. The coatings present on some tablets don’t allow the tablet contents to disintegrate till it reaches the intestine. If your ingredient combination is supposed to be broken down in the intestine, stick with tablets.

TAKEAWAY: Tablets have the advantage of being able to accommodate a larger overall dose of one or more nutraceuticals per pill than capsules.

Conclusion: Are Capsules Better Than Tablets?

If you didn't cheat and read the entire article, you've learned that:

So, which one is better - capsules or tablets?

From my perspective, since consumers tend to prefer capsules, I would recommend that when either a tablet or capsule can be used for a product, go with the capsule. If, however, you need to fit a lot of material in a single pill, then choosing a tablet as your delivery method is the way to go.

So, which dose form will you choose for your product - tablets or capsules? Let us know in the comments section below!

The following are some of the most frequently asked questions about tablets and tablet manufacturing that we've received from aspiring dietary supplement brand owners.

Q: Why is enteric coating more commonly used on tablets than capsules?

A:Because of the materials used during the enteric coating process, a hazy film or residue is apparent on the finished pill. When this coating is applied to capsules, it creates an unpleasant haze that you or your customers may find to be odd.

Q: Why are some tablet products packaged in glass bottles?

A: Glass bottles are ideal for either marketing purposes or to serve as a protective barrier. In some cases, a plastic bottle can implode and ruin a product's appearance.

Q: Why do some tablets have a line down the middle?

A: The line you might find on some tablets is called a Score. The purpose of the score is to allow the tablet to be broken in half if the dosage calls for it. If your product does not have a score, you may want to advise your customers not to break the tablet in half without consulting with you, the brand, or their physician first. In some cases (i.e. the tablet is a slow release formula), breaking the tablet in half could be hazardous.

Check out our Tablet Manufacturing FAQ page for more questions and answers about this topic.

The following are some of the most frequently asked questions about capsules and capsule manufacturing that we've received from aspiring dietary supplement brand owners.

Q: If capsules are so popular, why aren't all pills in capsule form?

A: Space is typically the reason for this. Because there is a limited amount of space in a capsule, larger formulations sometimes are more practical in a tablet. Calcium is a perfect example of this.

Q: Why do some capsules have such a strong odor?

A: Some ingredients used in your formulation make an unpleasant or strong odor unavoidable.  Make sure you speak to your contract supplement manufacturer about your formulation ahead of time if this is something that concerns you.

Q: Why does capsule weight vary by product?

A: Certain ingredients have different densities, and by mixing these ingredients into a formula, it creates a unique capsule weight based on the finished blend density and what can fit into a capsule.

Check out our Capsule Manufacturing FAQ page for more questions and answers about this topic.

[vii] Seng Yue C, et al. When Bioequivalence in Healthy Volunteers May not Translate to Bioequivalence in Patients: Differential Effects of Increased Gastric pH on the Pharmacokinetics of Levothyroxine Capsules and Tablets. J Pharm Pharm Sci. 2015;18(5):844-55.

[x] Seng Yue C, et al. When Bioequivalence in Healthy Volunteers May not Translate to Bioequivalence in Patients: Differential Effects of Increased Gastric pH on the Pharmacokinetics of Levothyroxine Capsules and Tablets. J Pharm Pharm Sci. 2015;18(5):844-55.

Tips for Selling Supplements in Your Own Brick and Mortar Store