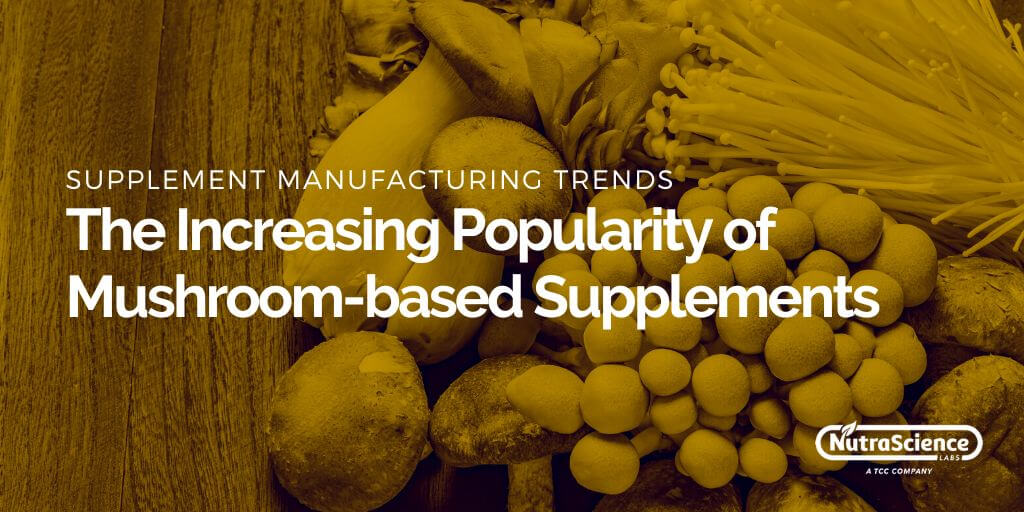 Consumer demand for mushroom-based dietary supplements have been increasing in popularity. Of course, that’s not to say that interest in the use of mushrooms hasn’t existed for a much more extended period. In fact, for more than two thousand years mushrooms have been used as medicines. Furthermore, in September of 1991, a 5,300-year-old mummy was found in the Tyrolean Alps, and his medicine kit contained Piptoporus betulinus, a mushroom he probably used as a natural worm-killer and laxative.[i]

There are many different species of mushrooms used in Chinese and Japanese natural medicines. This article covers the various health properties of these mushrooms and the ways you can formulate with them to create a high-quality dietary supplement product.

Short on time? No problem! I've recorded a podcast about this topic. Simply click the play button below to listen to this episode!

The History of Cordyceps sinensis

Cordyceps sinensis is a mushroom found on the high plateaus of western China, and its Mandarin name literally means “winter bug, summer herb”. This accurately describes the fact that the worm dies in the summer, and a mushroom grows on it. It was discovered 1,500 years ago when Tibetan herdsman found that their yaks were much livelier after eating this worm-mushroom from mountain pastures.[viii] Eventually, Cordyceps found its way into the hands of the Emperor’s physicians who considered it to have ginseng-like properties.[ix]

There are a number of studies supporting the effectiveness of Cordyceps, particularly for liver, kidney, and immune problems. Some of these studies have shown distinct immune-enhancing, and antioxidant effects.[x] [xi] [xii] [xiii] [xiv] Supplementation with Cordyceps in human subjects showed that it could promote cellular immune function and quality of life.[xv] In other research, supplementation with Cordyceps had a beneficial effect on liver function and immunocompetent.[xvi] [xvii]

The next mushroom is Agaricus blazei, which has also been shown to have immunostimulant effects.[xviii] In vitro and animal research suggest that it enhances the production of cytokines such as interferon and interleukin.[xix] [xx]

The History of Agaricus blazei

Interestingly, Agaricus was first discovered in Florida in 1944, although its main natural habitat is a mountainous region in Sao Paulo, Brazil. It has been suggested that the high rate of good health in that region is a result of the people using Agaricus as a part of their regular diet. The mushroom was brought to Japan in 1965. An artificial cultivation process was established in 1978, and since then this mushroom has been well evaluated in terms of biochemical and medicinal properties.[xxi]

Grifola frondosa, commonly known as maitake, has immunostimulant effects and activates natural killer cells, cytotoxic T-cells, and interleukin-1. Maitake contains beta-glucan, the D-fraction of which appears to be the most active and potent form.

Maitake is a mushroom which is famous for its taste and health benefits. It is also known as the “dancing mushroom”, since legend holds that those who found it began dancing with joy.[xxix] In any case maitake has been used historically as a tonic and adaptogen; that is a substance that invigorates/strengthens the system and helps it adapt to stress. Along with other “medicinal” mushrooms, such as shiitake and reishi, maitake is used as a food to help promote wellness and vitality.

Maitake contains complex polysaccharides which act as immunomodulatory.[xxx] Animal studies suggest maitake may promote healthy serum cholesterol and triglyceride levels already in a normal range.[xxxi] [xxxii] Also of interest, Japanese scientists undertook an in vitro experiment to see what effect maitake had on a certain type of cell that has the potential to balloon and turn into a fat cell. The results of the experiment showed that maitake inhibits the conversion of the cell into fat cells.[xxxiii]

Trametes versicolor has a long history of medicinal use in China and Japan and is one of the most researched and respected of the medicinal mushrooms from Europe to the Far East.[xxxviii] It grows on tree trunks throughout the world in many diverse climates, including North America.[xxxix]

Rounding out this conversation is Ganoderma lucidum or Reishi. Ganoderma lucidum have a long history in folk medicine, but researchers are just beginning to isolate and identify medicinal constituents. Active constituents from reishi mushrooms are primarily polysaccharides including beta-glucans and triterpenes.[xli] [xlii] [xliii]

The History of Reishi Mushrooms

Reishi mushrooms, grow wild on decaying logs and tree stumps in the coastal provinces of China.[xliv] Reishi has been used in Traditional Chinese Medicine for at least 2,000 years.[xlv] The Chinese name translates as the “herb of spiritual potency” and was highly prized as an elixir of immortality.[xlvi] Its Traditional Chinese Medicine indications include treatment of general fatigue and weakness, sleeplessness and more.[xlvii]

So now that we've established the health value of these mushrooms, what are the delivery forms that a brand owner should consider when planning to formulate a mushroom-based supplement?

The answer is that depends on what you’d like to have in the formulation. The flavor of mushroom extracts can range between earthy/nutty to slightly bitter. So, if you’d like a powdered product, you’ll need to choose those mushrooms with a relatively neutral flavor profile, or those only requiring a low dose so that any undesirable flavor qualities can get lost among the other ingredients. If you’re good with a capsule, then the mushroom flavor won’t be an issue. You may also want to consider a combination of two or more mushrooms since they tend to have complementary effects.

How Can NutraScience Labs Help You Create Mushroom-based Supplements?

If you want to make sure to make the right mushroom choices regarding delivery forms and combinations with other mushrooms and nutraceuticals, you’ll want to make sure to work with an experienced contract manufacturer like NutraScience Labs. We’ve helped over 2,300 dietary supplement brands around the globe manufacture and bring customized, high-quality nutraceuticals to the market, so we can help guide you in making the right choices for your mushroom product.

For more information on how to get started or to speak with one of our production specialists, request a free supplement manufacturing price quote or call 855-492-7388.

[xxxviii]Kidd P.M. The use of mushroom glucans and proteoglycans in cancer treatment. Alternative Medicine Review. 2000;5:4–27.