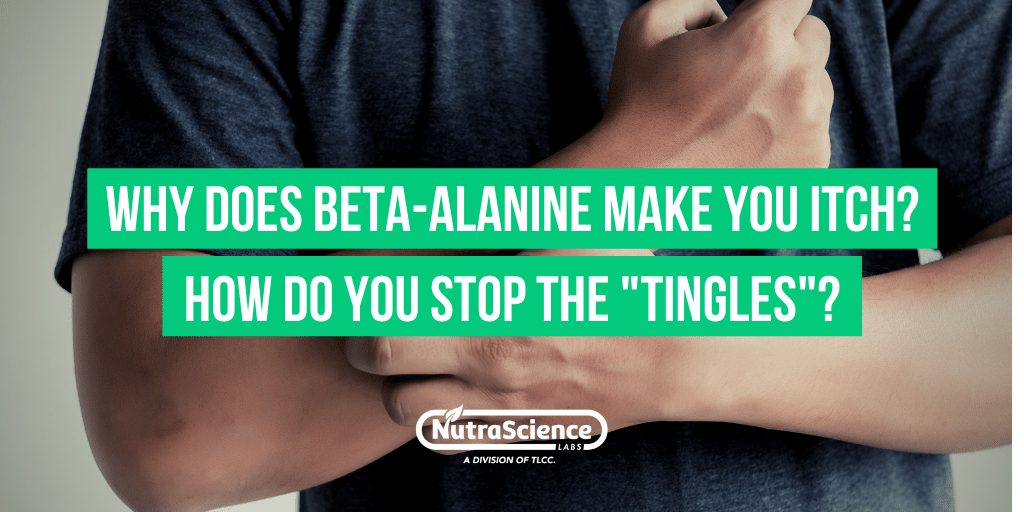 Why Does Beta-Alanine Make You Itch?

Beta-alanine is a non-essential amino acid. Unlike most amino acids, it is not used by your body to synthesize proteins. In the world of bodybuilding, performance nutrition, and sports supplements, the amino acid beta-alanine (or as β-alanine) stands out as one of the few supplements with solid science demonstrating its effectiveness.

What Does Beta-Alanine Do to Your Body?

In addition to what beta-alanine does to your body, another question you may be asking yourself is, "How does beta-alanine work?"

By itself, the ergogenic properties of beta-alanine are limited; however, beta-alanine has been identified as the rate-limiting precursor to carnosine synthesis,[i] [ii] and has been consistently shown to increase levels of carnosine in human skeletal muscle. The results are significant improvements in performance as noted below.

Recreational or elite athletes with specialization in a variety of sports including running, cycling, swimming, basketball, football, rowing, water polo, wrestling, skiing, and others have used beta-alanine in clinical trials. These showed lab-based exercise results, such as time to exhaustion and power output, and field-based, such as performance times. Also, these studies (and reported personal use) demonstrated the "beta-alanine itch."

In a rush? Click below to listen to my 5-minute podcast:
"Why Does Beta-Alanine Make You Itch (And How To Stop It)":

What are the Benefits of Beta-Alanine?

According to a position paper on beta-alanine written by the International Society of Sports Nutrition in Journal of the International Society of Sports Nutrition,[iii] the results of beta-alanine supplementation and subsequent increases in muscle carnosine concentrations include: 1) improved exercise performance, with more pronounced effects in open end-point tasks/time trials lasting 1 to 4 min in duration; 2) attenuation of neuromuscular fatigue (particularly in older subjects), and 3) possibly improvement in tactical performance.

What Are the Side Effects of Beta-Alanine?

The primary side-effect of beta-alanine is the itch. Almost everyone who's ever taken a supplement containing beta-alanine can attest to the infamous beta-alanine itch or beta-alanine tingle: the sure-fire tingling and itching of the neck, shoulders, and arms that starts about 15 minutes after you take your pre-workout and goes away after a half-hour or so.

The scientific term for this is “paraesthesia”, and is described as dose-dependent flushing and a feeling of pins and needles. While it may be a harmless side effect, it's left more than one person wondering, "Why does beta-alanine make me itch?"

Why Does Beta-Alanine Make You Itch?

While there's plenty of research supporting claims about beta-alanine's workout-enhancing abilities (thanks largely in part to its relationship with carnosine, a muscle synthesizing dipeptide cousin), people often wonder why it is that beta-alanine makes you itch.

As it turns out, beta-alanine seems to activate (get ready for this) Mas-related genes or sensory neuron-specific G-protein coupled receptors. The simple explanation is this is a group of receptors responsible for initiating itchiness in the skin. There may be other mechanisms as well. This is currently being investigated.

How Long Do the Beta-Alanine Tingles/Itch Last?

Most people who use this supplement ask the question, “How long do beta-alanine tingles (or itch) last?”

Although it's not the same for everybody, tingles/itch generally start about 15 minutes after taking beta-alanine and last for about 30 minutes.

As a Brand Owner, How Can I Stop the Beta-Alanine Itch/Tingles?

Another common question among consumers is how to stop beta-alanine itch or tingles. Good news! As an experienced bodybuilding supplement manufacturer, we suggest these three different, yet effective, approaches for reducing the itch that you as a brand owner should know about.

What is the Recommended Dosage for Beta-Alanine?

The recommended doses of beta-alanine are 4 to 6 g/day. This is the amount shown to increase muscle carnosine concentrations by up to 64% after 4 weeks,[iv] and up to 80% after 10 weeks.[v]

The Final Word on Beta-Alanine

The "beta-alanine itch" is a fascinating piece of bodily phenomena (even if it can be a slightly annoying one). That being said, the itchiness tends to wear off over time—although it can be mitigated in the first instance via lower dosing, sustained releasing or the use of BetaPrime™. In any case, beta-alanine is one amino acid where the potential benefits outweigh the side effects.

With over 120 years of contract supplement manufacturing experience, NutraScience Labs has created innovative capsule, powder & tablet products for hundreds of sports nutrition brands - and now we want to do the same for you! Our tried and true approach produces high-quality dietary supplements that are customized to our customer's specifications and stand out in today's competitive nutraceutical industry.

To learn more about our manufacturing capabilities, award-winning packaging design services & convenient fulfillment solutions, call us at 855-492-7388 or send us your request to receive a free nutraceutical manufacturing price quote. We return most quotes within 48 business hours of receiving them.