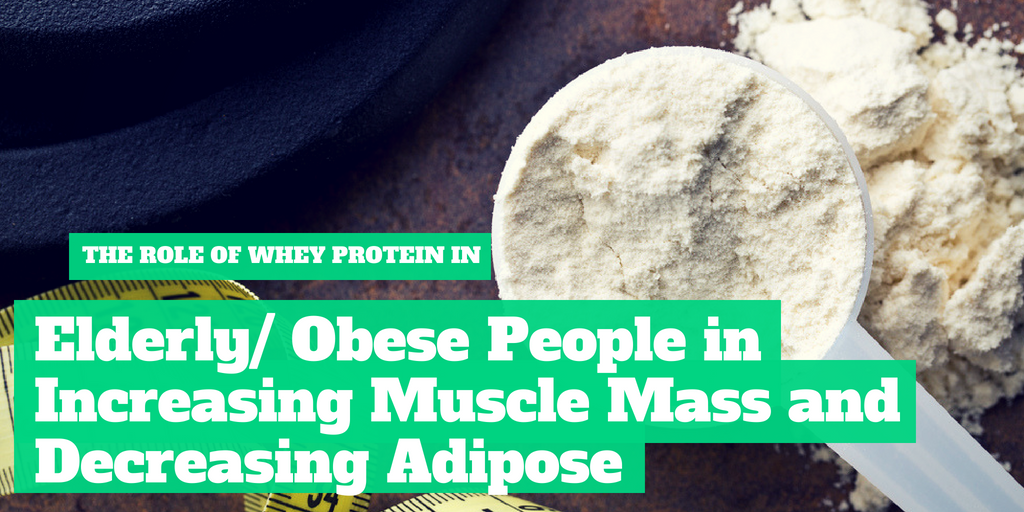 The Role of Whey Protein in Elderly/Obese People - Clinical Study

This Research brief is summarized from a published clinical study. All the information and statistics cited below were taken directly from the original publication piloted by Coker, et al.1 NutraScience Labs has restructured or paraphrased some sections of this brief in an attempt to more succinctly summarize the research.

The elderly population is particularly prone to the accelerated loss of muscle mass or sarcopenia with advancing age which is further complicated by the combined influence of physical inactivity and poor nutrition that often accompanies the aging process.

Combined with the challenge of sarcopenia, the prevalence of obesity among elderly adults has increased dramatically.

While moderate increases in dietary protein intake beyond the Recommended Daily Allowance (RDA) have been suggested to enhance anabolic activity in skeletal muscle, amino acid consumption has also been shown to facilitate an increase in muscle protein synthesis.

To meet the aims of the study, a caloric restriction paradigm designed to elicit 7% weight loss and decrease metabolic risk was chosen.The overriding hypothesis was that the supplementation of the whey protein + essential amino acid meal replacement (EAAMR) formulation will be required to promote the optimal reduction of adipose tissue while preserving lean tissue in obese, elderly adults.

It was also proposed that the changes in body composition would occur in conjunction with an increase in the skeletal muscle protein fractional synthetic rate (FSR) to EAAMR compared to competitive meal replacement (CMR).

Healthy males and females, ages = 65-80 years of age and of all races and ethnic backgrounds, were recruited and enrolled for a caloric restriction-based weight loss intervention designed to promote 7% weight loss.

In conjunction with the consumption of solid food in both groups, subjects were randomized to one of two groups that would consume either EAAMR or a CMR five times/day.

Based on eligibility, volunteers were randomly assigned to one of two groups:

Both groups consumed 5 servings a day.

Obese, elderly volunteers in both groups (EAAMR or CMR) completed one visit that included a stable isotope experimental session. Following the completion of the experimental testing sessions, all volunteers were instructed to consume a low calorie diet for 8 weeks.

Body weight and body composition was measured weekly by our clinical staff. Any volunteer that failed to lose weight on two subsequent visits was removed from the study for noncompliance to the protocol.

Body Weight and Consumption
Body mass, BMI, and body composition were measured pre and post weight loss, and during each weekly visit.

Muscle
Tissue biopsies of the vastus lateralis were immediately rinsed with cold saline, blotted, and frozen in liquid nitrogen.

Subjects
12 volunteers were enrolled, and one subject dropped out due to their inability to comply with the protocol. Therefore, 11 obese women and men lost 7% of total body weight, and completed all aspects of the study.

Anthropometrics
Relative to the caloric restriction-induced weight loss interventions, there was a significant and similar 7% reduction in body weight in EAAMR and CMR.

This experimental approach made it possible to determine whether consumption of EAAMR was more effective than CMR in promoting the concomitant reduction of adipose tissue and preservation of lean tissue during caloric restriction-induced weight loss in elderly, obese individuals.

While the sample size may have affected the outcome, consumption of EAAMR seemed to favor the preservation of lean tissue, but was not significant with the limited number of participants.

Other factors such as the administration of the meal replacements, timing sequence of the protocol, the characterization of the subjects, and the length of the protocol could have also influenced the results related to body composition.

While we were not able to achieve statistical significance in terms of EAAMR promoting enhanced preservation of lean tissue, the sparing influence of muscle loss might have been demonstrated with a larger sample size. Acute administration of EAAMR did promote a significant increase in skeletal muscle protein FSR compared to CMR.

While the results of the present study do not suggest that EAAMR would be sufficient to completely prevent the reduction of lean tissue during caloric restriction-induced weight loss, the study was able to demonstrate the preferential reduction of adipose tissue with 7% weight loss.

In conclusion, it is proposed that high quality protein in addition to essential amino acids represent a critical variable in the preservation of lean tissue and augmentation of adipose tissue reduction in the elderly population.