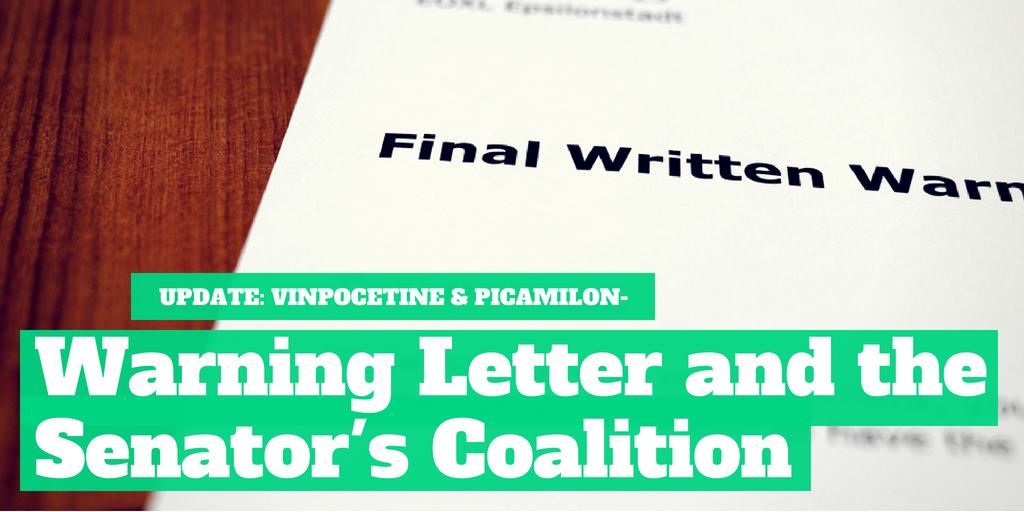 Back in November, we took a closer look at the growing controversy surrounding  the cognitive enhancers vinpocetine and picamilon. Spearheaded by the ranking member of the US Senate's Special Committee on Aging, Senator Clair McCaskill of Missouri, the investigation was prompted, primarily, by the results of an analysis completed and published by researchers from the National Center for Natural Products Research at the University of Mississippi and Cambridge Health Alliance/Harvard Medical school.1

Read our original post on the controversy surrounding vinpocetine and picamilon.

The Case Against Vinpocetine & Picamilon

In the months since this story first broke, the FDA has yet to take any further action other than the 5 initial picamilon warning letters. That being acknowledged, if Senator McCaskill and others like her who are proponents of limiting the use of picamilon and vinpocetine in non-prescription supplements / medications continue to push the FDA for further action, there is a chance that we will see changes to the regulations in the coming years.1,2,3

If changes are made to the regulations, dietary supplement formulations that contain either ingredient may have to be updated in order to remain compliant. Fortunately for those who own or manufacture products containing one or both of these ingredients, there are viable alternatives available.

For manufacturers and brand owners looking for to learn more about picamilon and vinpocetine alternatives or about other ingredients commonly found in cognitive health products, there are dozens of acceptable nutraceutical options. We've decided to highlight two common ingredients that, based on the available scientific research, might complement your current arsenal of cognitive health supplement products.

The father of all cognitively beneficial nutraceuticals, current research has shown that certain extracts of Ginko Biloba leaf may have the ability to improve circulation, which happens to be one of vinpocetine's most commonly sought characteristics.

Over decades, dozens of medical and scientific journals have taken the time to review Ginkgo's effectiveness. Most all of these studies suggest that the extract may help support memory and overall cognitive function.4,5,6

Research done on a certain form of GABA has shown that supplements containing 100 mg of that from of GABA may help reduce levels of anxiety and induce relaxation within 1 hour of the GABA being taken.7 Similar effects on the mental state have been recorded by other studies.8 By helping reduce levels of anxiety, GABA may help improve cognitive function.

Finding the Right Ingredients for Your Supplement

Ultimately, finding the best alternatives for the vinpocetine and picamilon in existing supplements (as well as those that are in preproduction) requires research and a willingness to consider all and any of the possible alternatives.

Along with scientifically and medically supported journals and databases, a worthwhile resource for any dietary supplement brand owner is a knowledgeable contract manufacturer. Many manufacturers have the internal resources and (more importantly) the willingness to help brand owners explore and discover the best options for their products.