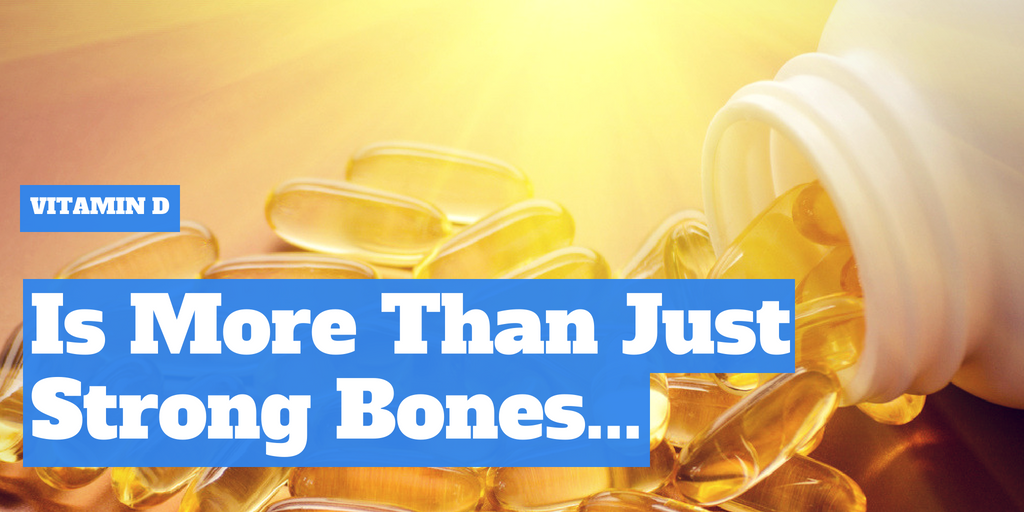 Vitamin D is for More Than Just Strong Bones...

Vitamin D is probably one of the first vitamins you ever became aware of as a kid — milk, sunlight, and bad experiences with liver, that’s where most of us stop when we think of this absorption-aiding “vitamin.” (It’s actually a prohormone.)

That’s a bit unfair since this hard-to-classify nutritional staple can be beneficial to everyone from athletes to the elderly. Vitamin D has a lot more going on than many people realize.

The most well known health benefit associated with Vitamin D is that it's known to support bone health.

It helps the body absorb calcium and phosphorus from the food you eat. People diagnosed with osteoporosis and women who have already gone through menopause are encouraged to eat and take supplements high in Vitamin D to help build stronger bones.

One of the primary health benefits of vitamin D is that it can be a serious performance booster. It’s well known that it optimizes skeletal and muscle function, but for athletes, the benefits can be remarkable. Increasing amounts of research and anecdotal evidence are beginning to point to the idea that vitamin D for athletes can genuinely improve athletic performance.

Does Vitamin D Help Muscle Growth? Six decades ago, Eastern bloc countries put so much faith in vitamin D that they would plant their athletes in front of sunlamps…a practice that apparently paid off. Their runners saw a 7.4 percent improvement in 100m times (in comparison to the 1.7 percent boost in a control group.) Additionally, a study of soccer players revealed improved sprint times, and another study found that muscles demonstrate increase strength with vitamin D intake.

The potential muscular boost has gotten more recent attention, with researchers at the University of Birmingham tackling the relationship between the vitamin and muscle mass. They studied 116 healthy volunteers (ages 20 to 74) and found a positive correlation between levels of lean mass and active forms of vitamin D. This study opens the door to more research to understand the relationship between vitamin D, muscle mass and strength, and even sex.

A Friend in Cold and Flu Season

Whether we’re talking athletes or your average American who just wants to avoid unnecessary sickness, vitamin D still deserves some extra attention because of the importance of vitamin D in warding off colds and the flu.

So, does vitamin D help prevent colds? A study out of Queen Mary University has put together some pretty strong evidence that supplementing vitamin D could provide protection against acute respiratory infections, colds and the flu included. Researchers studied raw data from 11,000 participants around the world and came to the conclusion that vitamin D boosts levels of anti-microbial peptides, which function like natural antibiotics, a connection which could also explain the correlation between vitamin D and protection against asthma attacks.

An Aid in Aging

Muscle performance isn’t a concern for athletes only. Falls in elderly populations are a direct result of the deterioration in muscle that comes with age.

Researchers from MD Anderson Cancer Center in Houston examined patients over age 65 who were receiving active cancer care for urologic, breast, gynecologic, lung, or gastrointestinal cancers. These patients were more likely to experience osteoporosis, frailty, and vitamin D insufficiency which in turn increased the likelihood of injurious falls. Its anti-aging properties are now considered to be one of the most essential roles of vitamin D among its other benefits.

No matter who you are, a healthy heart should be a top priority, and vitamin D’s heart health benefits could be powerful aides in achieving optimal cardiovascular health.

Data from 13,039 participants in the Atherosclerosis Risk in Communities study revealed a correlation between vitamin D deficiency, 25(OH)D levels and lower levels of HDL-cholesterol (the “good” cholesterol) over time.

Moving a bit lower in the body, low levels of vitamin D have been found to correlate with relapse in ulcerative colitis patients. Researchers conducting a study out of Beth Israel Deaconess Medical Center believe that the connection is due to the relationship between vitamin D and the protein cathelicidin in the cells that line the colon. It’s believed that the relationship has beneficial effects on the microbial composition in that area of the body.

So should you start planning a Caribbean vacation and popping beef liver supplements tomorrow? Not exactly.

While there’s been a bump in the use of vitamin D supplements in the U.S., individual needs vary based on goals, current health makeup, and lifestyle. A simple trip to a physician can go a long way in determining exactly how individuals can benefit from vitamin D in a way that optimizes their health and performance goals.

About the Author: Megan Williams

Megan stepped into the world of nutrition almost by accident when she started training Brazilian jiu jitsu to "reset" after graduate school. Her professional background in business (she has an MBA in international business) and hospital consulting gives her a unique perspective not only on nutraceuticals, but also the B2B world of supplements and performance. Megan still enjoys training with partners that range from office workers to MMA fighters, as well as keeping up with the business of sports and professional athletics online.