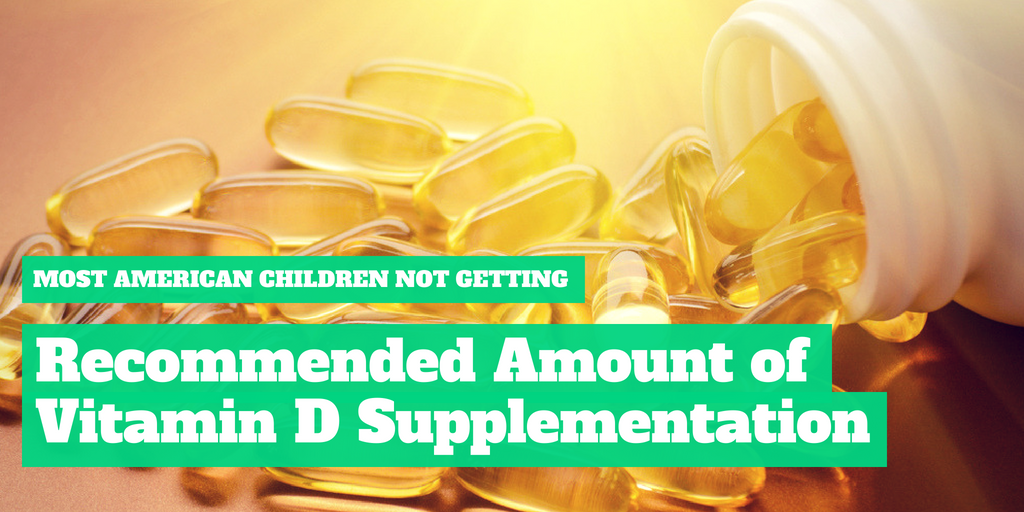 Most American Children Not Getting Recommended Amount of Vitamin D Supplementation

Vitamin D deficiency was thought to be relatively rare in the United States, but recent incidences of rickets in children are on the rise suggesting that American children may not be getting the Recommended Daily Intake (RDI) of Vitamin D that is required for the development of healthy bones and other important biological processes.

According to a study by researchers of the Albert Einstein College of Medicine at Yeshiva University, New York, 7 out of 10 children have low Vitamin D levels. The study analyzed data gathered in 2001 to 2004 by the National Health and Nutrition Examination Survey (NHANES) of 6,275 children aged 1 to 21. Previous data from NHANES surveys shows Vitamin D levels in children over the past twenty years have declined. Sedentary lifestyles, not spending enough time outdoors and the widespread use of sunscreens are a few of the plausible causes for this growing deficiency. 1 Low Vitamin D levels could put these children at serious risk for bone and heart health concerns as well as compromises to cardiovascular health when they reach adulthood.

From the over 6,000 participants, 9 percent were found to be Vitamin D deficient; 61 percent were vitamin-D insufficient. Low levels of Vitamin D were common in children who were older, who were female, African-Americans, Mexican-Americans, who were obese, drank less milk (less than once a week) or spent more than four hours a day watching television, on videogames or on the computer. Said, Dr. Juhi Kumar, a fellow in pediatrics at Children's Hospital at Montefiore Medical Center, the University Hospital and Academic Medical Center for Albert Einstein College of Medicine, "We expected the prevalence of vitamin D deficiency would be high, but the magnitude of the problem nationwide was shocking."

Why is Vitamin D Important?

Vitamin D is a fat-soluble micro-nutrient that the body needs to perform a range of diverse functions. In fact, so broad is the range that scientists believe that Vitamin D plays a role in almost every bodily function. The discovery of Vitamin D receptors in every human cell has led scientists to believe that Vitamin D plays a far more extensive role in the body, both as a vitamin and a hormone, than we had ever thought.

Vitamin D is naturally present in certain foods such as fatty fish (mackerel and tuna), eggs, mushrooms and yeast. Because Vitamin D is so essential for health, many foods like milk, juice and cereals are fortified with vitamin D to enrich our daily dose. Food is one way to get Vitamin D, but the body gets most of it, about 80 to 90 percent, from exposure to sunlight, which is why Vitamin D is often referred to as the "sunshine" vitamin!

Several studies show the importance of adequate Vitamin D intake in all stages of life - from pre-natal to adolescence to the senior years of life. Vitamin D is needed by the body to absorb calcium and phosphorous - the two major building structures of healthy bones. Some studies have established a link between inadequate levels of Vitamin D and maintaining a healthy weight. 3

Why Is Vitamin D Important for Supplement Business Owners?

In November 2010 the Institute of Medicine released new RDIs for Vitamin D based on findings from several break-through studies. For children and adults up to age 70, the RDI is 600 IUs. Seniors aged 70 and above should take 800 IUs of Vitamin D daily.

Supplement business owners can easily provide their customers with the recommended intakes through a variety of formulations based on age, gender and specific health factors. Convenient delivery options for children include chewable vitamins in a variety of shapes, sizes and flavors, liquid Vitamin D and multi-nutrient powders in delicious flavors.

Submit your request to receive a free quote or call (855) 492-7388 to speak to one of our Production Specialists to learn how you can help your customers meet their RDIs of Vitamin D. Discuss the variety of formulations and delivery options we can offer your customers, not just for children but for men, women and seniors as well as condition-specific formulations of Vitamin D health supplements.