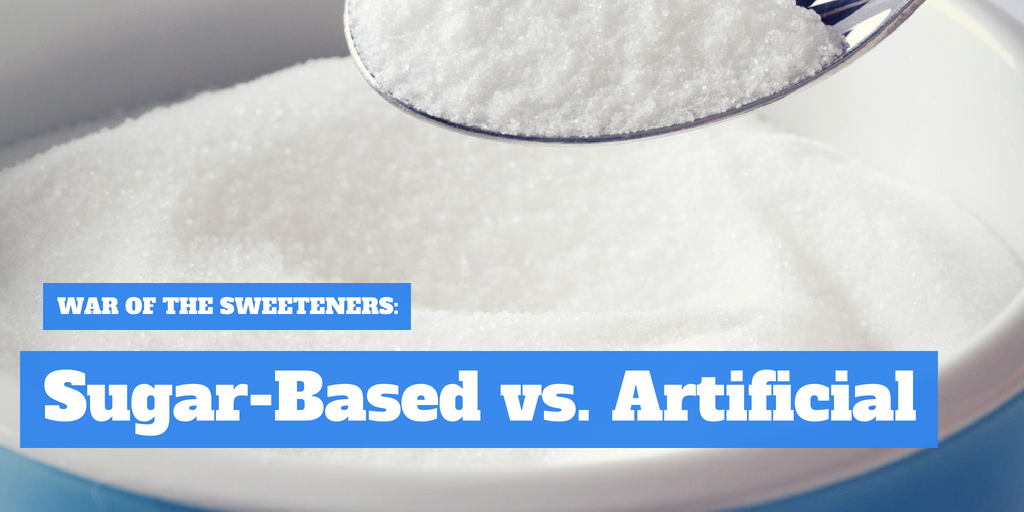 War of the Sweeteners: Sugar-based vs. Artificial

Over the last few years, the conversations and discussions surrounding sweeteners (sugar-based or otherwise) have come to dominate the nutritional scene. For brand owners and other manufacturers of products, including dietary and sports supplements, deciding between sugar-based, artificial, and alternative sweeteners for each product in their arsenal is no small task.

When it comes to sweeteners, everyone has an opinion. some claim the sugar-based sweeteners are more harmful to us, others saying that artificial sweeteners are the true villains. In a world where sour opinions run rampant, what's a formulator to do?

According to one 2010 study, the average American consumes about 66 pounds of refined sugar, 64.5 pounds of corn-derived (but still sugar-based) sweeteners, and 1.5 pounds of honey and edible syrups each year. That that bring our annual (total) sugar-based sweetener consumption to a whopping 132 pounds per person per year.1 Research pointing to the less than positive effects of sugar consumption has been readily available to brand owner and – more importantly – to consumers for years.

Along with the correlations that have been shown to exist between large quantities of sugar and excess body fat, research has shown that too much sugar in the diet contributes towards a myriad of less than pleasant ailments and conditions including (but by no means limited to), diabetes,2 dental cavities, compromised immune systems, kidney issues, atherosclerosis, oxidative stress and cancer.3 Certainly not a fun list.

We know what modern research has to say about sugar-based sweeteners, but what about artificial ones. Are they really any better for us? This is where things become less than clear. While there have been tens of thousands of studies on both categories of sweeteners, a little digging will show that the results are actually inconclusive. For almost everything from weight gain4, 5 , to the effects on blood sugar in diabetics 6,7 - if there's a study making one claim, chances are there's another study out there claiming just the opposite.

Breakdown In the Body: A Spoonful of Sugar...

Even though we're still waiting on a verdict concerning how each category can affect our health, there has been some conclusive research on the difference between how our bodies break down each type. For many artificial sweeteners, the body will break them down into their component parts (things like amino acids) and handle each component as it normally would.8  Usually, any controversy surrounding the breakdown of this category of sweetener in the body is the result of conflicting opinions/research surrounding the "base components" that the body has to process.

Stevia is a plant grown for the sweetness of its leaves. The compounds in stevia responsible for providing its sweetness (steviol glycosides, for those science buffs among us),can provide up to 300 times the sweetness of sugar. Moreover, stevia currently has not been associated with any ill effects on the body. In fact, some research suggests that the plant may help may support healthy blood pressure,9 and may support normal blood sugar levels.10

Luo han guo (more commonly known as Monk Fruit) has been used for hundreds of years in China as a natural sweetener and as a traditional support for respiratory and throat issues.11 A naturally produced Lou han Guo fruit concentrate can also be 300 times sweeter than sugar.12

Even though there's an incredible amount or research available, the contradictory nature of that research has forced brand owners and other decision-makers to seek additional information and insight. Along with financial logistics and other business concerns, some of the most important factors to weigh when choosing between artificial, sugar-based, or an alternative sweetener are the wants, needs, and opinions of your customers.