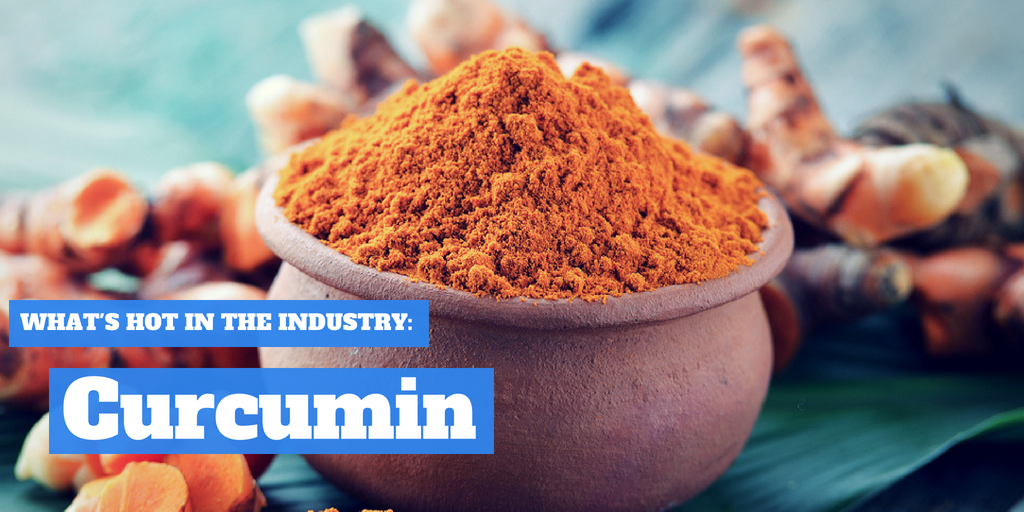 Curcumin- What's Hot in the Industry, Benefits, Side effects

What's yellow in color, derived from a species of ginger root, and currently taking the health and wellness industry by storm? It's curcumin, of course! One of the three principle curcuminoids found in turmeric, curcumin has seen a significant spike in popularity and interest, which has been fuelled, at least in part, by the growing body of academic and scientific research on its uses and benefits.

One of our favorite ways to take the temperature of an ingredient within the industry is with the help of Google and its trend reports. When it comes to relative interest over time (based on search engine queries) the graph for curcumin looks like this1:

Now that’s a good looking graph. And, if it’s any indication of how things will play out for curcumin over the next few months and years, there are certainly plenty of opportunities to be had for those within the health and wellness industry. But enough about projections and charts, let’s take a closer look at some of the talking points that have left the dietary supplement industry aflutter.

Before we dive into some of the properties that are being explored or research that’s being cited, it pays to take a closer look at the differences between Curcumin and its parent plant, Turmeric.

Are curcumin and turmeric the same thing?

As we’ve mentioned, Curcumin is a derivative of Turmeric, which happens to be one of the more popular species of ginger root – one that is often recognized for its popularity in Southeast Asian and Indian cuisine as well as its ties to traditional Ayurvedic Medicine. Typically speaking, processed Turmeric will contain anywhere from 2-5% curcumin.2

While most, if not all, of the claims being made concerning Curcumin will require further scientific substantiation if they are to be taken as fact, there is currently a massive body of scientific work on this curcuminoid. Among these works, some of the most popular topics include curcumin’s relationship to inflammation (both chronic and acute), antioxidants in the body, and cardiovascular disease, among others.3,4,5

Thanks to the increased consumer demand (which is directly correlated to the increase in publicly acknowledged and touted scientific research), the market has seen a significant increase in Curcumin/Turmeric-based products and supplements.

Those looking to make the most of the Curcumin/Turmeric wave before it crests may want to consider giving additional focus to the delivery method and bioavailability of the Curcumin in their dietary supplement or product. Why? Well, as NutraIngredients-USA and other publications like them have pointed out, one of the primary drawbacks to Curcumin from a practical standpoint is its notoriously poor solubility. Numerous studies have acknowledged that once delivered to the human system by oral ingestion, even in fairly large quantities, the amount of Curcumin that actually makes it to the bloodstream may be fairly small.6

Fortunately for us, there is a tremendous amount of scientific research currently being done (which supplements the decades' worth of studies that have already been completed). Currently, two of the most popular and potentially powerful methods for enhancing the bioavailability of curcumin in supplements are the addition of adjuvants (substances that work with the body's immune response) such as piperine and the incorporation of hydrophilic coatings.7

For consumers looking to get the most out of their curcumin supplements, similar research suggests that black pepper, fats (ie: olive oil, coconut oil, etc), and quercetin (a flavonoid found in a variety of plants and foods, like red grapes, onions and apples) may also improve the bioavailability of curcumin.8

Keeping all of this in mind, our number one prediction for Curcumin supplements over the next few years is this: The Curcumin/Turmeric supplements that will perform best will be those that can substantiate the highest Curcumin bioavailability rates. That being acknowledged, there is still plenty of market share left for those looking to develop a Curcumin-based supplement; but the time to act is now!

Call 855-492-7388 now to speak to a live representative or send us your request to receive a free nutraceutical manufacturing price quote in 48 business hours!