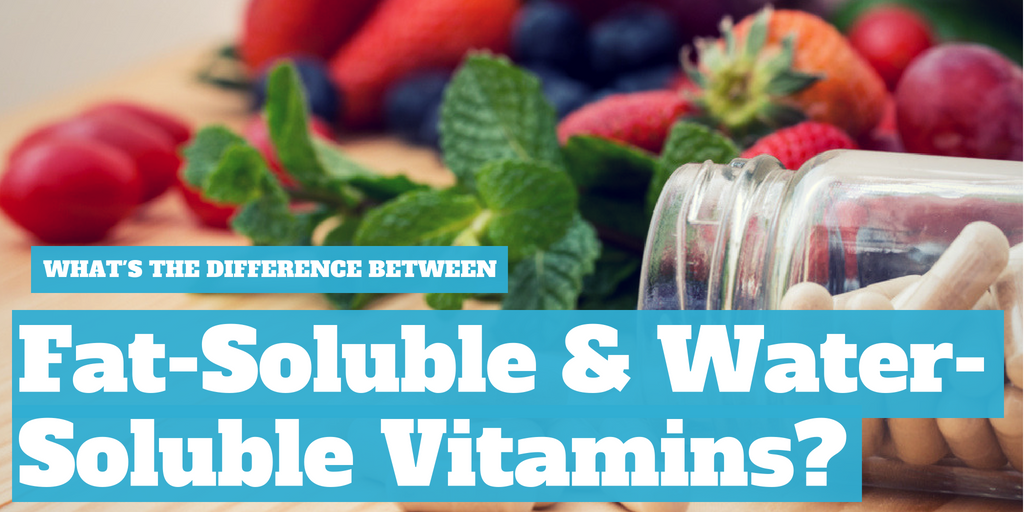 The Difference Between Fat-Soluble and Water-Soluble Vitamins

“Do you take vitamins?” “Do you buy them at a vitamin store?”

The word “vitamin” has become a catch-all term used to refer to almost any dietary supplement. But the fact is that vitamins are very different from other categories of supplements like herbs, amino acids and enzymes. For one thing, Americans often lack sufficient vitamin intake. Research shows that only 10% of Americans eat a good diet,[i] [ii] and even those that do may receive insufficient amounts of vitamin D, vitamin E and choline.[iii] Clearly, a need for vitamin supplementation exists.

For many, this need is met with the use of a multivitamin supplement. In fact, a survey by the Council for Responsible Nutrition revealed that multivitamins are the most popular supplement, with 56% of U.S. adults using them.

Of course there are many other types supplements that contain vitamins, including sports nutrition products, and a broad range of specialty formulas. Naturally, it's important to understand the role that each vitamin performs in order to choose the right ones for any given dietary supplement formulation; and the first thing we need to understand is the difference between fat-soluble and water-soluble vitamins.

Feel free to continue reading or if you're short on time, listen to our podcast by clicking on the image below:

What Are Water-Soluble Vitamins?

What Are Fat-Soluble Vitamins?

Vitamin C is best known for its role in the synthesis of collagen, a connective tissue protein used as a structural component of blood vessels, tendons, ligaments, and bone. This water-soluble vitamin is also needed for the synthesis of: 1) the neurotransmitter norepinephrine, which performs critical brain function including an effect on mood, and 2) the amino acid carnitine, which is essential for the transport of fat into cellular mitochondria, where the fat is converted to energy or ATP.[iv]

Another significant function of vitamin C is the important role it plays as an antioxidant, protecting vital molecules in the body from damage by free radicals and reactive oxygen species. These molecules include proteins, lipids (fats), carbohydrates, and nucleic acids (DNA and RNA). Vitamin C also plays a complementary role with other antioxidants, such as vitamin E, helping to regenerate them from their oxidized from back into their reduced (active) form. [v] [vi]

Each of the B vitamins has their own functions to serve in the body, but in general they may be considered to play a role in energy metabolism and helping to promote homeostasis when the body is under stress. The use of the entire B-Complex is recommended since the individual B vitamins affect one another’s absorption, metabolism, and excretion.[xix]

Each of the B vitamins is converted into coenzymes in the body. These B vitamin coenzymes are involved, directly or indirectly in energy metabolism. Active individuals with poor or marginal nutritional status for a B-vitamin may have decreased ability to perform exercise at high intensities. Exercise stresses metabolic pathways that depend on thiamine, riboflavin, and vitamin B-6. Consequently, the requirements for these vitamins may be increased in athletes and active individuals.[xx]

The B-complex vitamins are intimately involved in the function of the nervous system,[xxi] and so can play a role in helping to counter some of the negative effects of stress. In fact, the ability of humans to respond to stresses can be influenced by nutritional status—including the status of key B vitamins.[xxii] In one study, vitamin B1 (thiamine) and vitamin B6 (pyridoxine) together were found to be especially necessary for workers whose activity is associated with nervous-emotional stress.[xxiii] Similar results were seen in a previous study.[xxiv]

Vitamin A plays an important role in vision, bone growth, reproduction, gene expression (i.e., the process by which the information coded in genes (DNA) is converted to proteins and other cellular structures), cell division, and cell differentiation (i.e., the process during which a cell becomes part of the brain, muscle, lungs, blood, or other specialized tissue).[xxxiv] [xxxv] [xxxvi] [xxxvii] [xxxviii] Vitamin A helps regulate the immune system, which helps prevent or fight off infections by making white blood cells that destroy harmful bacteria and viruses.[xxxix] [xl] [xli] [xlii] [xliii] [xliv]

Vitamin D is the “sunshine vitamin”, so coined because exposure to the sun’s ultraviolet light will convert a form of cholesterol under the skin into vitamin D. This nutrient is best known for its role in helping to facilitate the absorption of calcium and phosphorus (as well as magnesium), and so helping to promote bone health.[xlviii] In addition, vitamin D: 1) supports the normal proliferation of cells and stimulates the differentiation of cells (specialization of cells for specific functions),[xlix] 2) is a potent immune system modulator,[l] 3) plays a role in insulin secretion under conditions of increased insulin demand,[li] and 4) may be important for supporting the renin-angiotensin system’s regulation of blood pressure.[lii]

From a scientific perspective, vitamin E is not just one compound (as is the case with other vitamins), but rather a family of eight isomers. These include alpha-, beta-, gamma-, and delta-e tocopherols, and are called isomers. In this context, the term isomer refers to compounds with the same structural formula but different spatial arrangements of atoms.[lviii] The other four isomers are alpha-, beta-, gamma-, and delta- tocotrienols (a family of natural compounds related to tocopherols). However, according to the Food and Nutrition Board, Institute of Medicine, vitamin E is defined as one specific compound, alpha-tocopherol. The reason for this is that alpha-tocopherol is the only form of vitamin E that is actively maintained in the human body and found in the largest quantities in blood and tissues.[lix] Consequently, alpha-tocopherol is the only form that meets the latest Recommended Dietary Allowance (RDA) and Daily Value (DV) for vitamin E. Nevertheless, the other tocopherols and tocotrienols do have value to human health.

The primary function of vitamin E is as an antioxidant. Since lipids (fats) are part of all cell membranes, fat-soluble vitamin E is ideally suited to quench free radicals that would otherwise compromise the integrity of cell membranes. Vitamin E also protects LDL cholesterol from oxidation, which is important since oxidized LDLs have been implicated in the development of cardiovascular diseases.[lx]

In addition to its role as an antioxidant, vitamin E has also been shown to: 1) affect the expression and activities of molecules and enzymes in immune and inflammatory cells, and 2) inhibit platelet aggregation and to enhance vasodilation (which promotes circulation).[lxi] [lxii]

According to the National Health and Nutrition Examination Survey (NHANES) 2003-2006, Americans’ average dietary intake of vitamin E from food (including enriched and fortified sources) is 6.9 mg/day (10.35 IU). This intake is well below the current Daily Value of 15 mg/day (22.5 IU). This means that more than 90% of Americans do not meet RDA for vitamin E.[lxiii]

Vitamin K, a fat-soluble vitamin, was first known for its essential role in the functioning of several proteins involved in blood clotting or coagulation (which is important to prevent excessive bleeding after an injury).[lxiv] In fact, the “K” in vitamin K is derived from the German word “koagulation.” Now, vitamin K is understood to offer additional benefits, including its role vitamin-K dependent proteins which are necessary for bone mineralization (e.g., helping to keep calcium in the bone).[lxv] Likewise, vitamin K has been shown to help promote healthy arteries.[lxvi] [lxvii]

Knowing the fundamental differences between the various water-soluble and fat-soluble vitamins is a great way for brand owners and potential brand owners to stay informed, increase their authority, and – most importantly – increase their ability to meet their customers' needs.

[i] Report Card on the Quality of Americans’ Diets. Nutrition Insights, INSIGHT 28. USDA Center for Nutrition Policy and Promotion. December 2002.

[iii] United States Department of Agriculture. Center for Nutrition Policy and Promotion/ Comparison of Nutrient Content of each 2010 USDA Food Pattern to Nutritional Goals for that Pattern. Retrieved August 19, 2014 from http://www.cnpp.usda.gov/Publications/USDAFoodPatterns/ComparisonofNutrientContentofeach2010USDAFoodPatterntoNutritionalGoalsforthatPattern.pdf.

[xxxviii] Ross AC, Gardner EM. The function of vitamin A in cellular growth and differentiation, and its roles during pregnancy and lactation. Adv Exp Med Biol 1994;352:187-200.

Why Are There Ingredients Overages in Vitamins and Supplements?