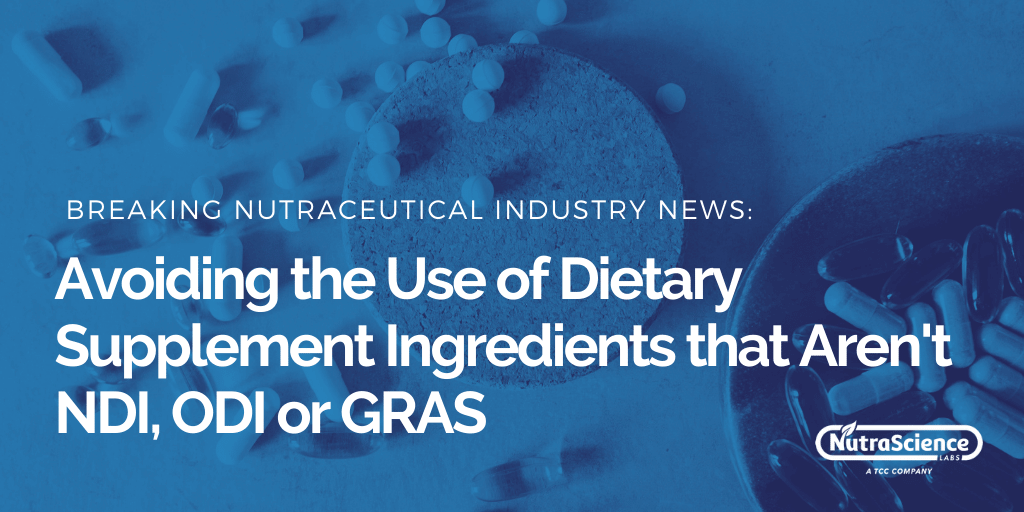 Avoiding the Use of Dietary Supplement Ingredients that Aren't NDI, ODI, or GRAS

An article recently written by Hank Schultz of Nutraingredients-USA.com highlighted the FDA’s recent action in sending warning letters to 10 dietary supplement companies who were using ingredients that were either not established to be allowed dietary ingredients, had cardiovascular risks, or both. Schultz indicated that the ingredients in question included 5-alpha-hydroxy-laxogenin, higenamine, higenamine HCl, hordenine, hordenine HCl, and octopamine.

Naturally, when there is online/social media buzz surrounding the latest hot ingredient, it is tempting to consider incorporating it into your supplement brand. Before doing so, however, you need to do your due diligence and determine if that ingredient is a dietary ingredient allowed for use in a dietary supplement. If it’s not, then you may be the not-so-happy receiver of an FDA warning letter, like the 10 dietary supplement companies mentioned above.

What is a New Dietary Ingredient?

If you want to submit a dietary ingredient to the FDA to gain its approval as an NDI, that may be done. You should first determine if the dietary ingredient has not been present in the food supply as an article used for food in the same chemical form that you plan to use in your dietary supplement. Then you must show why you consider that the new dietary ingredient will reasonably be expected to be safe under the conditions recommended or suggested in the labeling. Of course, there’s more to it than that, but those are the basics.

What is an Old Dietary Supplement Ingredient?

What Does GRAS Mean?

Generally recognized as safe (GRAS) is an FDA designation that a chemical or substance added to food is considered safe by experts under the conditions of its intended use.[iv]

GRAS substances are subject to premarket review and approval by FDA and may be used in dietary supplements as well as food. Unlike NDI and ODI classifications, the FDA does have an online database that can be searched for GRAS substances. There are quite a few common dietary substances that can be found there, like calcium carbonate, inositol, alpha-tocopheryl acetate (vitamin E)—and many, many others.

Clearly, it can be difficult to determine if a given ingredient is NDI, ODI, or GRAS—but you can get into trouble if you don’t know and take the risk of including it in your product. So, how can you mitigate this risk?

My recommendation for a brand owner like you is to do business with a supplement manufacturer that can help you navigate these tricky regulatory waters. NutraScience Labs' staff of account managers, formulators, and quality control professionals possess decades of nutraceutical industry experience and can advise you on what ingredients are allowed for use in a dietary supplement.

To learn more information about how we can assist you, call 855-492-7388 to speak with one of our representatives or send us your request for a free supplement manufacturing price quote.